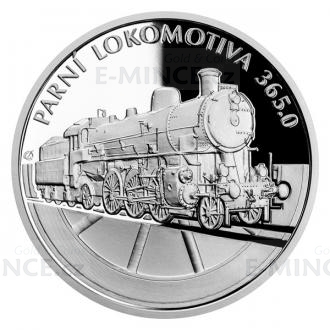 The Czech Mint is closing the second year of the collector's cycle entitled "On Wheels" by issuance of silver coin dedicated to the steam locomotive 365.0.

Shortly after the establishment of the independent Czechoslovak State Railways in 1918, their management dealt with the acute shortage of express locomotives. After the collapse of the monarchy, the newly formed republic inherited the second largest European network of local railways after Bavaria. Moreover, the vehicle fleet owned by ČSD after the Austrian and Hungarian railway companies was obsolete and had to be unified. The locomotive 365.0 became the first Czechoslovak design after the First World War. The First Czech-Moravian Machine Factory in Prague-Libeň (later part of the ČKD engineering plant) responded to an order from the Ministry of Railways. It was led by designer Ing. Vojtěch Kryšpín and delivered a total of forty locomotives between 1921 and 1923. Originally, the 365.0 series was planned to be used on heavy-duty highways instead of the older Austrian 375.0 series, which was expensive to operate. However, the performance of the new locomotives was not sufficient - especially on lines with more demanding inclination conditions, they were not able to maintain the required speed, and so they gradually switched to the transport of long-distance passenger trains. For example, on the route Prague - Brno - Bratislava, they drove more than 450 km a day. The 365.0 series locomotives were pushed out of prestigious performance by more modern ones called "Mikády 387.0“ at the end of the 1920s. Nevertheless, they remained popular among the staff for their ease of use. They were used in passenger transport until the end of the 1960s, when their half-century-long operation ended with the intensive motorization of ČSD. Although the locomotives of the first Czechoslovak design did not meet all expectations, they became a part of history. It is surprising that none of them has been preserved in a dignified condition, but thanks to the efforts of the Center of Historic Vehicles of the Czech Railways in Lužná at Rakovník, the locomotive 365.024 will be put into operation soon …

The reverse side of the coin, which was processed by the medal maker Luboš Charvát, is dominated by a depiction of the "sixty-five" on the tracks. A detail of one of the wheels of the locomotive belongs to main motifs of the reverse side. The obverse side of the coin, the circumference of which is formed by the wheel sections of various means of transport, is quite similar. Since the coins of the Czech Mint are issued with a license of a foreign issuer, the island of Niue, the obverse side still bears its necessary elements – a portrait and the name of Queen Elizabeth II, a nominal value of 1 DOLLAR (NZD) and the year of issue 2020.

A spectacular packaging in the form of a pop-up book, which contains accompanying text and period photographs, builds an integral part of the coin.