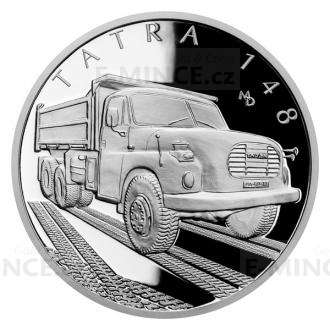 The versatile, reliable, powerful, but comfortable truck Tatra 148 has successfully continued the popularity of its predecessors and spread the reputation of the Kopřivnice car manufacturer around the world. The tenth silver coin from the cycle On Wheels of the Czech Mint pays tribute to it.

The Tatra Kopřivnice brand is famous for the truck Tatra 111, which was created for the needs of the German army, but became a symbol of renovation and building after the Second World War. The production of his successor was approved in 1952 as part of central planning. The result of the design evolution was the Tatra 148 model line, the prototype of which was introduced at the trade fair in Brno in 1968. Of course, the new model was the chassis of a typical "Tatra concept". This construction has pivoting half-axles, so the unevenness run over by one side of the car does not mean the tilt of the whole car. In addition, the frame with a central support tube is located just above the wheel axle, so the Tatras have a significantly lower center of gravity and excellent driving characteristics in the terrain. Inter-axle differentials, a synchronized manual transmission and a modern cab design provided driver with additional comfort. The Tatra 148 was created in a number of variants - one-sided and three-sided dump trucks, flatbed trucks, military swap bodies, truck cranes, truck excavators, mixers, tankers, tractors and fire truck specials. The one-sided dump truck S1, ideally in orange, has become iconic. A heavy truck with an unladen weight of 10,800 kg and a payload of up to 15,660 kg became the model for the legendary toy that every child dreamed of. The production of the Tatra 148 was terminated in 1982. With 113,647 copies produced, it was the first model in the brand's history to exceed the magical limit of hundred thousand pieces. Approximately 63,700 units were exported to 43 countries worldwide. Many of them still serve their owners reliably to this day…

Reverse side of the coin processed by the medal maker MgA. Martin Dašek presents the dump truck supplemented with tire prints, together with inscription TATRA 148. Since the coins of the Czech Mint are licensed by a foreign issuer, the island of Niue, the obverse side bears its necessary attributes – the portrait and the name of Queen Elizabeth II, the nominal value of 1 DOLLAR (NZD) and the year of issue 2021. Following the name of the collector´s cycle, the circumference of the obverse side is formed by the sections of the wheels of various means of transport.

The coin is stored in a spectacular packaging that contains accompanying text and period photographs. Do not forget that you can store your collection of various means of transport in fours in a practical collector's box that you will also find in the offer of the Czech Mint.