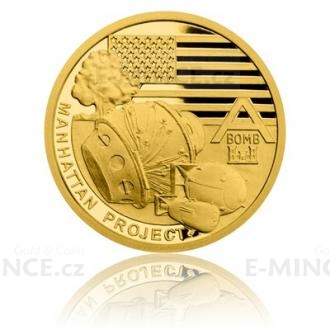 The Second World War raged on all fronts and brought about heavy casualties. The United States, who had recently joined the struggle, decided to find a way to end the conflict as quickly as possible. A mysterious project named Manhattan should have been a solution. The third gold coin of the Czech Mint from the miniset War Year 1942 commemorates its 75th anniversary.

The purpose of a strictly secret project was to develop so devastating a weapon that only its existence would discourage thoughts of war. The gun was an atomic bomb. Thousands of scientists, the greatest brains of their time gathered in the desert of New Mexico in 1942. Americans and refugees from the occupied Europe had strained all their forces to overcome their Nazi counterparts who were trying to achieve the same goal. They were completely cut off from the world. They had their families with them, but they could not even tell them on what day and night they were working - German and Soviet spies were ubiquitous. In complete secrecy, two prototypes of the atomic bombs were created, and scientists were competing to be he who succeeded first. The project brought fruit after three years of development. The first test was scheduled for July 16, 1945. The explosion did not ignite the atmosphere and destroy the entire planet, as some scientists predicted, but its strength exceeded all expectations. "I become death, a destroyer of the worlds," recited Robert Oppenheimer, the old Indian poet, when he introduced humanity to the atomic age.

The atomic weapon caused much suffering in 1945, but ultimately served its original purpose and shortened World War II for many months. As a reminder of human ingenuity, as well as a warning of its shrewdness, Luboš Charvat prepared a commemorative coin. The reverse side is dominated by the first three atomic weapons in history - Trinity, Little Boy and Fat Man - the mushroom cloud and the Manhattan project logo. The US flag is in the background. The obverse side carries the necessary elements of Niue island (the issuer who enables the Czech Mint to mint its own coins), the name and portrait of the Emperor Elizabeth II, the year of the issue 2017 and the nominal value of 5 DOLLARS (NZD). The composition is complemented by five helmets belonging to the nations who will appear this year on war coins - German, US, Soviet, British and Japanese.

You can save the ministry of war coins in an attractive collector's etui which you can also find on offer at the Czech Mint.