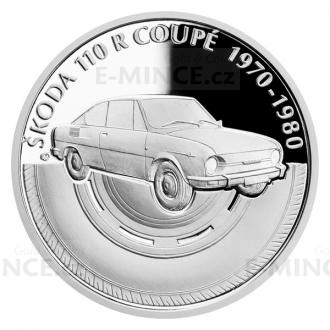 Although many interesting projects were created by car maker Skoda during the socialist era, many of them were not implemented - often because they did not correspond to the ideas of the then regime. Even so, several special cars, which were not intended for the working masses, have been produced. One such a car was produced in the plant in Kvasiny, where the popular convertible Škoda Felicia and the Škoda Octavia Combi were produced in the 1960s. Although it was proven and sought, Skoda 1000 MB - a car with a completely different concept, which had the engine at the rear, has been already produced in Mlada Boleslav. It was evident that the Octavia production would soon cease and the Kvasiny factory would become a mere supplier of spare parts. However, the employees did not intend to accept this and designed a coupe with flowing back and sports curves. This gave rise to the Škoda 110 R - nicknamed Erko - which enchanted motorists at home and abroad. The inline four-cylinder engine with a capacity of 1,107 cm3 delivered 45.6 kW - 62 hp - at 5,250 rpm and top speed exceeded 140 km / h. The 110 R was followed by several sporting variants, as well as a "police fighter" used by the Public Safety on the new D1 motorway. The coupe was sold without waiting list for not less than 78,000 crowns. Almost 90 percent of the production, which never reached the planned volume, was sold abroad during the first years. The last piece of the Škoda 110 R was assembled in Kvasiny on New Year's Eve in 1980. A total of 57,085 specimens were produced and the car, which has not lost its elegance, is still a subject of passionate interest.

The reverse side of the coin was processed by medal maker Luboš Charvát. It presents Erko (a model made in 1970 with two headlights and decorative moldings) surrounded by an inscription ŠKODA 110 R COUPÉ 1970–1980. The composition of the reverse side is supplemented by the tire in detail. Similarly, the obverse side of the coin bears the perimeter of the wheels of various means of transport. Since the coins of the Czech Mint are issued with the license of a foreign issuer, which is the island of Niue, the obverse side bears its necessary attributes - the portrait and the name of Queen Elizabeth II., the nominal value of 1 DOLLAR (NZD) and the year of the issue 2020.

The coin, which was issued with the official approval of the car manufacturer Škoda Auto, was stored in a spectacular packaging containing accompanying text and period photographs.
Related products