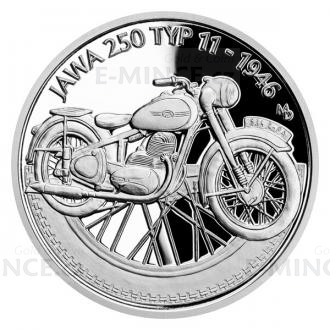 The second motorcycle that appears on the silver coin from the On Wheels cycle of the Czech Mint is the JAWA 250 type 11 nicknamed "Perak".

The establishment of the Protectorate of Bohemia and Moravia in 1939 affected all Czech engineering companies that were capable of weapons production, and JAWA was not an exception. The Nazis banned it from making motorcycles and cars for the civilian population, and the company was forced to reorient itself to the supply of various components for the war machine. However, the patriotic employees, who were proud of their success achieved in the field of motoring, refused to submit. They hid construction material in the barns and cellars and secretly worked on new projects. Almost 8,500 motorcycles and 700 cars were assembled from the parts that were saved from the German occupiers immediately after the end of the war. In addition to the pre-war types of motorcycles, the company's employees worked hard on the JAWA 250 motorcycle, which was the result of their secret war efforts. The first 1,360 pieces were produced in 1946. The Czechoslovak industry management correctly assumed that it could use the post-war failure of German production to expand abroad, and the new motorcycle with a modern design and elegant appearance embodied the ideal product. When the JAWA 250 was introduced at the World Motor Show in Paris in 1946, it aroused a huge response and deservedly won a gold medal for construction and design. Moreover, it captured Great Britain during a London motorcycle show in 1948. The rapid interest of the otherwise distinguished British, who enthusiastically removed the machine from the base so that they could sit on it and try out the suspension, surpassed even the wildest dreams of our designers and dealers. In the same way, the JAWA 250 conquered the entire planet - it was exported to 112 countries on five continents… It was the first domestic series-produced motorcycle with a rear suspension. This suspension was provided by two sliding telescopic shock absorbers with wound lips. Maybe that's why the machine got the immortal nickname Pérák. Another reason for this naming may be the story of the illegal development of the motorcycle during the occupation. At that time, the protectorate spread the legend of Perak - a jumping hero with springs on his feet, who fought fearlessly against the Nazis. MgA. Martin Dašek, who is not only an expert medal maker, but also a great lover of historic motorcycles, became the author of the commemorative coin. He accompanied the depiction of Pérák on the reverse side with an inscription JAWA 250 TYPE 11 - 1946 and, following the name of the cycle, added a detail of the wheel. The circumference of the obverse side is formed by the sections of the wheels of various means of transport. As the coins of the Czech Mint are issued with a license of a foreign issuer, the island of Niue, the obverse side bears its necessary elements - the name and profile of Queen Elizabeth II, a nominal value of 1 DOLLAR (NZD) and the year of issue 2020. The coin is set in a spectacular packaging which contains thematic treatises and period photographs. You can store your collection in practical collector's boxes.