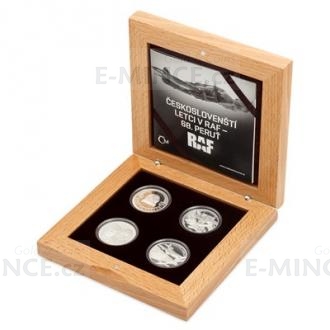 The Czech Mint closes the cycle that commemorates our “heavenly riders”. The fifth and last set of four silver coins pays tribute to the 68th Night Fighter Squadron RAF.

When the Luftwaffe launched the so-called "Blitz", which means a series of night bombing raids on English towns in September 1940, the Royal Air Force had no effective defense. The night pilots need to have good eyesight with a good dose of happiness. The results of these risky actions, of course, did not match the effort, and therefore they began to quickly develop night fighter squadrons equipped with specialized technology - the on-board radar that was invented in Britain. Night fighter squadron RAF number 68 was established on 7 January 1941 and the first Czechoslovaks joined it in July of the same year. During the Second World War they fought not only with German aircraft, but also ships and missiles.

The Czech Mint dedicated the cycle to Czechoslovak airmen serving in the RAF on the occasion of the 75th anniversary of the Battle of Britain. Gradually, the following topics appeared - symbols of Czechoslovak squadrons, their aircraft, flying aces and important events. A number of collectors pointed out that 68th Squadron would also deserve its coin in addition to the four Czechoslovak squadrons - 310th, 311th, 312th and 313th. It was characterized by a large number of Czechoslovaks, so the squadron adopted the Czech motto "Always Ready". Therefore, the cycle was closed by a commemorative set dedicated to the 68th Wing in 2019. Individual coins from the studio of academic sculptor Zbyněk Fojtů thematically follow the four previous sets - reverse sides carry the symbol of the squadron (owl with a Czech motto), its first effective night fighter (Bristol Beaufighter), two air aces (pilot Miloslav Mansfeld and radar operator Slavomil Janáček) and the scene of combat deployment (attack on the missile V-1). On the common obverse side of the coins there is the name and the portrait of Queen Elizabeth II, the nominal value of 1 DOLLAR (NZD), together with the year of the issue 2019, which means the attributes of the island of Niue that provides the Czech Mint with a license to coin its own commemorative coins. These attributes are supplemented with RAF symbols.

Four coins are placed in a wooden box decorated with engraving of the night fighter de Havilland Mosquito. The set also includes the most narrative accompanying publication. Individual chapters follow the scenes depicted on coins, both in word and unique photographs. Authentic experiences and archives of witnesses were used as source for the publication.