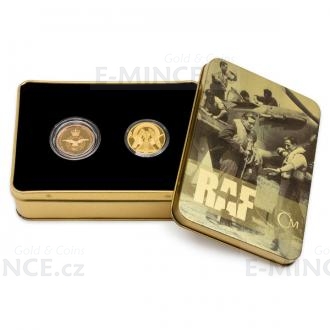 In 2018 RAF celebrates its 100th anniversary from its foundation. An extraordinary set consisting of one gold coin of the Czech Mint and one gold coin of The British Royal Mint was commemorated as a reminder of this jubilee because the British and Czech history have entwined in the 20th century.

The Royal Air Force of the United Kingdom - RAF - is the oldest independent air force in the world. It was formed at the end of the First World War in 1918 and was renowned during the Second World War, when it fought in its most famous campaign, which is the Battle of Britain. At that time, the island kingdom desperately needed help, and so the dozens of Czechoslovak airmen, who had lost their homes because of Nazi occupation and who had pending bills with the Germans, were also involved in the fight. They have enrolled in British history with extraordinary pilot skills, aggressive combat endeavors, and bravery in the face of power. "There has never been such many people obliged to a few in the history of human conflicts," Winston Churchill told his faithful pilots. "If the Czechs and the Poles did not help the Royal Air Force, we would not have won the battle for Britain," added Squadron Leader George Blackwood saying that in the event of a loss in the air, nothing would prevent the amphibious German invasion. By the end of the war, the number of Czechoslovaks serving in the RAF had grown to two thousand and at home and abroad they are still remembered as heroes.

The coin of the Czech Mint was made by the academic sculptor Zbyněk Fojtů, who has rich experience in RAF themes. The British Air Force Anniversary was issued on the reverse side through three airplanes from various stages of the centenary existence of the RAF. Bristol F.2 Fighter symbolizes the era of founding, the Supermarine Spitfire Battle of Britain and the Eurofighter Typhoon symbolizes the present. The RAF sign includes the inscription 100 YEARS OF THE RAF. The coins of the Czech Mint are based on the license of a foreign issuer, which is the island of Niue, and its obverse side therefore carries the necessary attributes, which are the portrait and the name of the emperor Elizabeth II, the nominal value of 25 DOLLARS (NZD) and the year of the issue 2018.

The bicoloured coin (from yellow and red gold) of the British mint was made by Rhys Morgan. The reverse is dominated by the RAF sign representing the eagle, the royal crown and the Latin motto "PER ARDUA AD ASTRA" translated as over obstacles to the stars. The inscription then bears 1918-2018, THE 100TH ANNIVERSARY OF THE ROYAL AIR FORCE. The obverse side of the coin is dedicated to the issuer, which is the United Kingdom, and which carries a portrait of Queen Elizabeth II, the text of ELIZABETH II DG REG FD (Elizabeth II, the Queen by the Grace of God, the Defender of Faith), together with the nominal value of TWO POUNDS (GBP).

The Czech Mint is the official partner of the British Mint for the Czech Republic. The set of two coins comes in a load of only 200 pieces and is stored in an exclusive etui with a special certificate of authenticity.