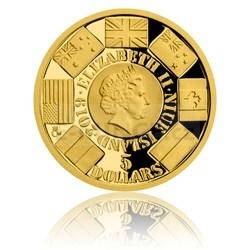 The Czech Mint commemorates the 75th anniversary of events in Europe on the first three gold coins from the War Year 1944 miniseries. The fourth and the final issue celebrate the Allies' triumph in the Pacific - the Battle of Leyte.

The US Navy focused on conquering the archipelago closer to Japan after the victories in the battles of Midway and Guadalcanal, however the main wars began in October 1944. The invasion of the Philippines required almost the entire US Pacific fleet and was launched on the small island of Leyte, where 170,000 troops landed. However, the Japanese did not intend to give up the Philippines, because there was a supply route, where the oil from occupied Southeast Asia was transported to Japan. Although the imperial navy did not have enough technology and fuel, it used all available ships and hit Leyte. Japanese forces were divided into three groups. The Northern Union consisted of four aircraft carriers. It looked dangerous, but with only a few onboard aircraft, it was a mere bait to lure Americans off the island. The decisive role was then played by the Central and Southern associations. Initially, the Japanese plan did not develop well. The Americans invaded the Central instead of the Northern Union and managed to destroy the unsinkable battleship Musashi, therefore the Union retreated. The Southern Union also failed and was completely scattered by the US forces, including some of the ships that had been repaired after the destruction of Pearl Harbor. The Americans decided to pursue the Northern Union. They discovered the defense of Leyte and unknowingly allowed to carry out the original Japanese plan. Meanwhile, the Middle Union turned back with Yamato - the largest battleship in history, which had greater firepower than all the American ships that remained on the island. Light American vessels had no chance against the Japanese fleet, but still embarked on a desperate and furious counterattack. Based on this, along with news of the destruction of other Japanese forces, the Japanese retreated. However, they deployed organized raid Kamikaze for the first time in the final act of defiance, ... To sum up, 280 warships and 200 thousand sailors and airmen took part in the largest naval battle in history.

Reverse side of the coin was made by the medal maker Mgr. Petr Horák. It is dominated by an American battleship entitled USS South Dakota. In the background there is the radar screen with which US sailors conducted the battle. The English inscription states BATTLE OF LEYTE. The obverse side is common to the entire War Year 1944 miniseries. It presents the flags of the states that participated in the operations depicted on the four coins and the essentials of the coin issuer. Since the Pacific Island of Niue provides the Czech Mint with a license to coin its own commemorative coins, it bears the name and the portrait of Queen Elizabeth II, the nominal value of 5 DOLLARS (NZD) and the year of the issue 2019.