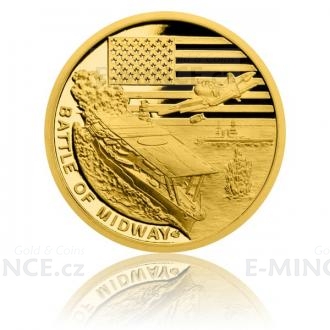 The year 1942 was the turning point of the Second World War. The situation on the eastern front was coming to the greatest battle in human history, the African crusade reached a point of reversal and needed to decide on the future of the newly opened Pacific front. The first gold coin from collector´s miniset War year 1942 was dedicated to the crucial battle at Midway.

When the Japanese naval forces attacked the US military base in Pearl Harbor in 1941, it seemed to be a devastating victory. However, the Japanese did not succeed to sink a single carrier, and these vessels were shown to have been a key element of warfare on an extensive water surface with many islands over the following months. The imperial command wanted to put it right and attacked the atoll Midway, where the decisive battle should have been performed. However, thanks to intelligence service efforts, the Americans managed to respond adequately and met the four Japanese aircraft carriers en route. They sent out three of their own counterparts. The Japanese lost an important moment of surprise and clash, which was unparalleled in naval warfare history. The warship cannons were not used to launch battle, but the aircrafts launching from their boards for the first time in history. The fight was led at a distance of nearly two hundred kilometers and the ships of the fighting parties did not even get into visual contact. The battle was really decisive, but not as the Japanese intended. The fleet of "Land of the Rising Sun" was completely decimated - it lost all four aircraft carriers, one heavy cruiser and countless other techniques and human lives, and her only success was to sink one enemy aircraft carrier. The empire did not forget the defeat, went into defensive and its dreams of taking control of the Pacific disappeared ...

"Technical and military matters suit me," says medal maker Lubos Charvat, who unified his hobby and processing of the coin. He devoted the reverse side of the coin to a dramatic conflict – american headfirst bomber Dauntless attacks the Japanese aircraft carrier Akagi, whose board explodes. In the background, a Japanese cruiser accompanies and the flag of the United States of America closes the scene. On the reverse side there is the English description BATTLE OF MIDWAY. The obverse side belongs to the attributes of the island of Niue, which enables the Czech Mint to mint its own coins, together with the profile and name of the ruler of Elizabeth II., the year of the issue 2017 and the nominal value of 5 DOLLARS (NZD). The composition is complemented by five helmets belonging to nationalities which will appear on war coins this year - German, American, Soviet, British and Japanese.

In addition to the four-part miniset, the Czech Mint offers a metal collector´s box with thematic illustration dedicated to American sailors serving in the Pacific.