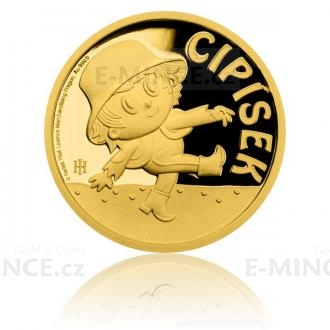 Animated Rumcajs' stories appeared in 1967, now 50 years ago. At the same time, his wife Manka was introduced to television viewers. Moreover, we can not forget the robbers son Cipisek, who has his own gold commemorative coin!

There is a joyous message in the woods of Řáholec – Cipísek was born to Rumcajs and Manka. They put him in a pine-tree cradle, put a pillow of moss under his head and covered him with a pile of leaves. The proud dad, who was shoemaker in Jicin, immediately made him some boots and was surprised when the newborn boy wore them out in just a day! Cipisek enjoys forest playgrounds, wild animals and fairy-tale creatures are his friends and no fix is strange to him. But he is the true son of his parents - he is cunning, he can always counsel himself and never lets injustice remain unpunished.

On the reverse side of the coin, Cipísek walks through the woods for another adventure – with a robbers hat and a carefree smile. On the obverse side there are the attributes of the island of Niue, whose license allows the Czech Mint to mint its own commemorative coins, together with the portrait and the name of Queen Elizabeth II., the year of the issue 2017 and its nominal value 1 DOLLAR (NZD).

The gold coin Cipisek is the final issue of a three-part collector´s miniset. If you bought the Rumcajs coin, you also got a collector's album featuring his son, too!