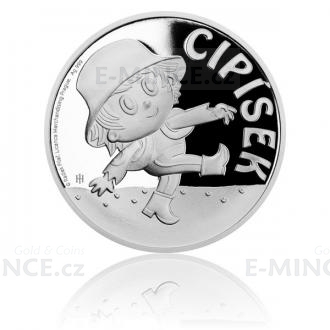 Who would not know the robber Rumcajs, his beautiful wife Manka and their son Cipisek. Would you believe that their stories have been enjoying small and big audiences for 50 years? It must be commemorated with a silver commemorative coin!

The stories about the kind family of robbers were written by Václav Čtvrtek. They appeared in TV bedtime stories and many books. His other heroes include, for example, Forman Šejtroček, the ranger Robátko or the shoemaker Kuba and his beloved Stázina. What do all these fairy-tale characters have in common? The town of Jicin, where their stories took place and where Václav Čtvrtek lived as a little boy: "It was during the First World War when my mother took me with my younger brother to visit my grandfather in Jičín. The visit lasted for four years. At that time I was just discovering the world around me. I consider my great personal happiness that the beautiful city of Jičín was a godparent. I have never seen a tower higher than the Valdice Gate, a garden greener than that of my grandfather, and a corner more mysterious than the little one in Libosad. It was therefore an easy choice when I wondered where my fairy tales should be set. I have been writing them according to children's memories of Jičín ... "

Some of the experience of Václav Čtvrtek is also reflected in the adventures of the robbers son Cipisek. He creeps through the woods of Raholec on the reverse side of the coin - in the boots made by Rumcajs, who worked as shoemaker. The obverse side of the coin bears the profile and name of the emperor Elizabeth II., the year of the issue 2017 and the nominal value of 5 DOLLARS (NZD). The attributes from the Pacific island Niue provide the Czech Mint with a license to mint its own commemorative coins.

Cipisek´s silver coin is the third and last issue of the fairytale miniset - it has its place in a collector's album, including coins dedicated to Rumcajs himself.