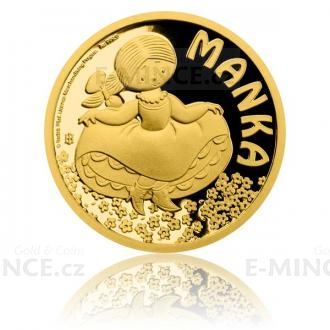 It has been 50 years since robber Rumcajs appeared on television, and with his stories he caught the hearts of both small and big audiences. But what would Rumcajs be without a devoted family! Especially without his wife Manka, who had dedicated to her, her own gold commemorative coin.

Manka is the fulfilled dream of every robber. A skillful and resolute housewife is a beautiful picture and can brighten even the most foolish day - whether with her smile, red skirt, or the magical engagement ring that Rumcajs made for her from the sun ray. She cooks a real robbery soup, makes a cozy home for her son Cipisek from a hideous cave, and even though she sometimes misses her life in Jicin, she never regrets that she married a forest man. When we consider that instead of blonde, hard-working Manka, Rumcajs almost chose a dark-haired bossy Anka...

The reverse side of the coin, which according to the drawings of the illustrator Radek Pilař was elaborated by the talented medal maker Irena Hradecká, DiS., presents Manka while walking through the small grassy clearing in the forest Řáholec, while holding her skirt in order to admire flowers. The obverse side of the mintage bears the attributes of the island Niue, which provides the Czech Mint with a license to issue its own commemorative coins. It includes the name and portrait of Queen Elizabeth II, the year of the issue 2017 and its nominal value of 5 DOLLARS (NZD).

Do not forget that Rumcajs´s coins include a fairy tale album in which Manka is also featured!