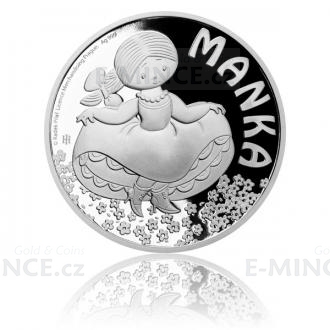 50 years ago the robber Rumcajs appeared on television for the first time. And he was not alone - his wife Manka, to whom belongs a commemorative coin made of pure silver, was completely faithful to him.

Unlike most fairy stories, a robber couple does not live in a fictional kingdom. Václav Čtvrtek set the adventures of his heroes in the town of Jičín and its surroundings, where he spent his childhood, which he lovingly remembered. There is no fictitious time in which the stories take place. The spouse of the emperor who rules the land is called Bette, undoubtedly, Elizabeth "Sissi" Bavarian, the empress of the Austrian monarch Franz Joseph I. Another piece of the puzzle is built by the war with Prussia. The story is then unmistakably set in the infamous Prussia-austrian War that swept through our territory in 1866. To sum up, the stories of Manka, Rumcajs and Cipisek happened 150 years ago!

On the reverse side of the coin, Manka walks among the flowers growing on Řáholec clearing - wearing high boots, a wide red skirt, braided hair and a cheerful smile. The talented medal maker Irena Hradecká, DiS made the relief according to the original drawings from the illustrator Radek Pilař. The obverse side of the coin bears the profile and name of Queen Elizabeth II, the year of the issue 2017 and the nominal value of 1 DOLLAR (NZD) – the necessities of the island Niue, which enables the Czech Mint to mint its own commemorative coins.

If you have a coin with Rumcajs in your collection, you have a collector´s album where you can also present Manka!