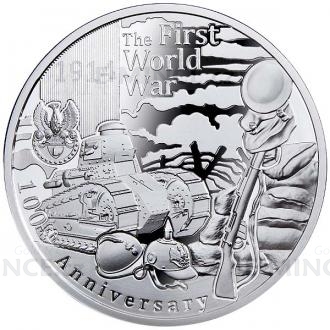 100th Anniversary of the outbreak of World War I

All elements depicted on the coin refer symbolically to the first world war operations. Prussian and British helmets are presented as symbols of the Triple Entente and Central Powers between which the armed conflict broke out. A tank and barricades symbolize a clash of modern technologies with strategy and tactics. For the first time in military history new machines, like airplanes, submarines, tanks and trucks, were used. The coin also features an eagle of the Polish Legions symbolizing the resurrection of Polish sovereignty.

The coin stands out due to the use of a latent image – on its reverse 1914 and 2014 change depending on a viewing angle.

• Full-relief reverse of the coin
• High commemorative and collectible value
• Minted in .999 fine silver
• Limited, low mintage of only 2,014 pieces
• Offered in an attractive packaging
• Accompanied by a Certificate of Authenticity

Obverse:
In the central part of the coin – the effigy of Her Majesty Queen Elizabeth II. On the right – the mint mark (m/w). Below – the hallmark: Ag 999. In the rim – inscriptions: ELIZABETH II, NIUE ISLAND (the issuer), 1 DOLLAR (the face value) and the year of issue – 2014.