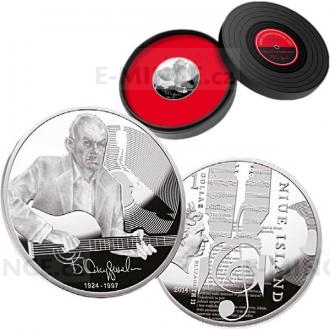 The coin commemorates the prominent figure of the poet, composer and writer who brought an invaluable contribution to the development of Russian culture.

This work of mint art is a tribute to the talent, dedication and passion of one of the most outstanding artists of modern Russia.

This exceptional coin will take you to the world of Bulat Okudzhava, the world in which words, images and sounds created compositions capable of touching the hearts of millions of mortals around the world.

OBVERSE
In the central part of the coin – a musical stave and the notation of melody to the poem entitled "Prayer" by Bulat
Okudzhava. Below – a word line, interwoven with stylized images of a guitar and a clef. On the right side – an outline of a vinyl, the hallmark: Ag 999 and the issuer: NIUE ISLAND. On the left – a profile portrait of Her Majesty
Queen Elizabeth II and inscriptions: 1 DOLLAR (the face value), m/w (the mint mark), 2014 (the year of issue)
and ELIZABETH II.

REVERSE
On the reverse there is an image depicting Bulat Okudzhava during performing a guitar song. Below – Okudzhava’s autograph and the dates of birth and death of the artist: 1924-1997. In the background – a stylized image of a vinyl record with an outline of Bulat Okudzhava’s silhouette.