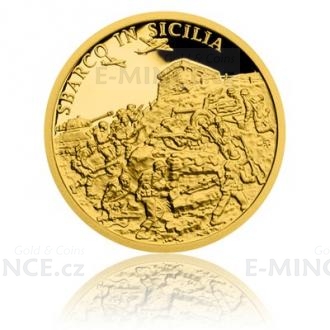 The Allies of the Second World War began to win on all fronts in 1943 and managed to open a new one. The key role was played by the invasion of Sicily, which is commemorated by the final gold coin of the Czech Mint from the four-part miniseries War Year 1943.

The Nazis launched the Citadel's operation on the Eastern Front at the beginning of July 1943 and the monumental battle of Kursk began. The Germans threw everything they had in their direction in order to stop the Soviet invasion. At that time, however, they were still worried about British and US units that launched their own Husky operation to open a new European front to relieve red-guards. Allied victory in nearby North Africa contributed to the invasion of Italy controlled by the fascist dictator Benito Mussolini. The Italian and German commanders did not have the slightest idea of where the attack would come from, while the British and the Americans knew the deployment of the enemy forces precisely thanks to the capture of radio traps. American Admiral Nimitz then compared Sicily to an empty walnut because its defense was focused only on the coast. In addition, it was too stretched. There was only one anti-tank cannon every 8 kilometers. The attack on Mussolini Island began on the night of 9-10 July, using both air and naval landing units that landed seamlessly. Though the Axis soon managed to move its forces to the right places, it was too late. The Allies already had solid ground under their feet. The German troops fought each position, but the Italians surrendered. Their morale was low. They wanted to prevent the destruction of their country and speed up the inevitable signing of peace. The legendary Sicilian mafia has also played the important role because it has not fused with the fascist regime. The local bosses supported the Allies, providing them with an intelligence and propaganda to defend the people's resistance. However there was anger between the British and the Americans flanking side by side. Both nations wished to play a decisive role in the defeat of the enemy, and their disputes slowed down the invasion. The island was largely captured in just two weeks which resulted in the next campaign, but a number of elite German units were evacuated to continental Italy where the Allies experienced some of the most vicious moments of the war.

The main motif of the reverse side of the commemorative coin from the author’s duet Asamat Baltaev, DiS., and academic sculptor Nikolay Baltaev (son and father) became an amphibious assault of the Allies. The American infantry attacks the rocky stronghold defended by German soldiers. It is supported by an iconic Sherman tank and airborne airplanes are visible in the sky. The Italian inscription describes SBARCO IN SICILIA - the Invasion of Sicily. The commemorative coins of the Czech Mint are based on a license issued by a foreign issuer, which is the Pacific island of Niue, and their obverse side carries its necessary attributes which are the profile and the name of Queen Elizabeth II, the nominal value of 5 DOLLARS (NZD) and the year of the issue 2018.  The obverse side, common to the entire ministry, in addition, presents the great US and USSR martial awards which are the Silver Star and the Order of Glory.

Keep in mind that you can put all four war coins in a metal collector's box decorated with a thematic illustration.