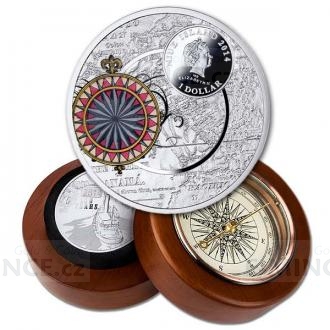 A coin which has been made 10 commemorate the 100lh anniversary of one of the most signiticant shipping conduits in the world and at the same time one of the greatest achievements of humanity in the water construction.

The "100th anniversary of the Panama Canal" coin is a pure form ofl innovation - the coin has been decorated wilh a latent image.

Additionally, the high coin's value is emphasized by a multi-coloured digitally printed embelishment as well as one and only wooden presentation case in the form of a magnetic compass.

Reverse:
The reverse depicts a historic moment of the first vessel traversing the Panama Canal. Above the vessel and along the rim – the name of the coin: 100 YEARS OF THE PANAMA CANAL.

Obverse:
The obverse shows an image of a wind rose against a map illustrating the Panama Canal. In the upper part of the coin – an image of Her Majesty Queen Elizabeth II. Around it – inscriptions: NIUE ISLAND (the issuer), 1 DOLLAR (the face value), ELIZABETH II, the year of issue: 2014 and the mint mark: m/w.