You are here:Home»World Coins»Belarus»2013 - Belarus 20 Roubles - Year of the Horse Gilded with Swarovski Elements 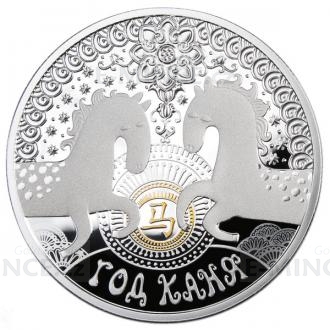 On 13th May 2014 in Mexico took place an award ceremony accompanying the contest organized at the 28th international Mint Directors Conference.

The Mint of Poland won two main prizes of the stake of eight given in this prestigious competition. The jury, which consisted of the participants of the conference, once again honoured and awarded the coins of the Mint of Poland in the categories of The most technologically advanced silver coin of a weight under 5 ounces (Year of the Horse, 20 roubles) and The most technologically advanced coin with no weight limitation (Fortuna Redux, 6 oz). Prominent guests turned up at the prize-giving ceremony. The gala was also honoured with the presence of the former president of the United States, George W. Bush.

The upcoming 2014 year, that is the Year of the Horse, has been immortalized by the Mint of Poland and the National Bank of the Republic of Belarus on this silver, spellbinding collector coin.

The coin with the multitude symbols of luck, wealth and happiness, will be the perfect gift for those born in the year of the horse as well as a charming talisman. The horse is associated with a symbolism of Heaven and magical powers. It is said to be a lucky omen, which brings happiness and walfare. The horseshoe is said to be a symbol of luck. From time immemorial the horseshoe has been used as a talisman to attract happiness, wealth and all good fortune. Gold colour symbolizes wealth and felicity...

The coin combines modernity, innovation and the highest craftsmanship, which make it an exquisite collector’s item.

Obverse:
In the central part of the coin – a stylized image of an artistic clock mechanism decorated with a SWAROVSKI ELEMENTS in the middle. Around it – inscriptions of the forthcoming Years of the Horse. At the top - an image of the State Emblem of the Republic of Belarus. On the outer ring inscriptions in Belarusian: РЭСПУБЛIКА БЕЛАРУСЬ (Republic of Belarus), the year of issue: 2013, the face value: 20 РУБЛЁЎ (20 roubles) and Ag 925 (alloy).

Reverse:
In the central part of the coin - an artistic picture of horses. In the middle - a Chinese hieroglyph meaning the Year of the Horse. Around horses - artistic ornaments. Below it – an inscription: ГОД КАНЯ (the name of the coin in Belarusian).