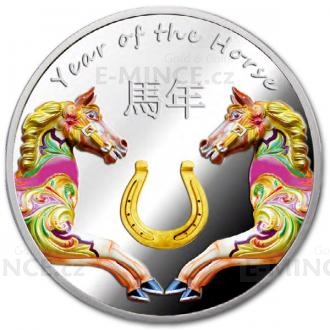 The upcoming 2014 year, The Year of the Horse, has been immortalised by the Mint of Poland with commemorative silver coin.

“Chinese Calendar” is the series of commemorative coins. Each year the Mint of Poland issues a coin showing one of the 12 animals of the Chinese Zodiac:
Pig, Rat, Ox, Tiger, Rabbit, Dragon, Snake, Horse, Goat, Dog, Monkey, and Rooster.

The 12-year long cycle repeats five times because each time the year of the given animal appears under the sign of different element: water, earth, wood,
fire or metal. It is believed that the animal assigned by year and the element influence sociopolitical and economic events as well as character and skills of people born in the particular year.

Advantages of people born in the Year of the Horse are strong character and singleness of purpose.
As Horses are considered to be life and soul of the party they are also extremely spontaneous,
temperamental and full of enthusiasm.

It is worth to know that each coin of the series has its equivalent for children.

Reverse:
In the central part of the coin a relief of an upside down horseshoe created using the selective
gilding technology. Above the image – an inscription in Chinese “The Year of the Horse”.
On the left and the right side – a colored relief of horses created using UV printing technology.
On the top: a semicircular inscription: YEAR OF THE HORSE.

Obverse:
The central part of the coin depicts the effigy of Her Majesty Queen Elizabeth II.
On the left – a semicircular inscription: ELIZABETH II. On the right – a semicircular inscription:
NIUE ISLAND. On the bottom – a nominal value of the coin (1 dollar) and a year of issue (2014).
Under the effigy of Elizabeth II, on the right – the Mint’s trademark (mw).