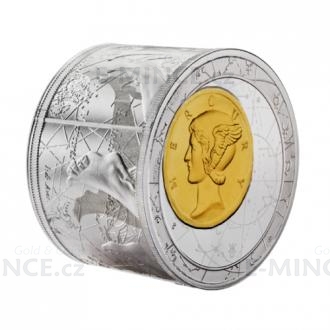 The new coin of the Mint of Poland presents the Mercury, god of tradesmen and travelers, who was often depicted on Roman coins. He has been believed to bring good luck in business and commerce, and his winged staff caduceus protected merchants.

Obverse:
An image of Mercury, next to it an effigy of Her Majesty Queen Elizabeth II and the face value: 50 DOLLARS. In the background - a map of the world with elements symbolized travelling. Along the rim – the inscriptions: 2013 (the year of the issue), NIUE ISLAND (the issuer), Ag 999 (the alloy).

Reverse:
An image of gold coin with the effigy of Mercury, in the background – a map of galaxy.

The third side of the coin:
An stylized image of Mercury’s legs with god’s wings, in the background – a map of the world with elements symbolized travelling.

This coin of the Mint of Poland was awarded at the prestigious Mint Directors Conference in Mexico in 2014!

On 13th May 2014 in Mexico took place an award ceremony accompanying the contest organized at the 28th international Mint Directors Conference.

The Mint of Poland won two main prizes of the stake of eight given in this prestigious competition. The jury, which consisted of the participants of the conference, once again honoured and awarded the coins of the Mint of Poland in the categories of The most technologically advanced silver coin of a weight under 5 ounces (Year of the Horse, 20 roubles) and The most technologically advanced coin with no weight limitation (Fortuna Redux, 6 oz). Prominent guests turned up at the prize-giving ceremony. The gala was also honoured with the presence of the former president of the United States, George W. Bush.