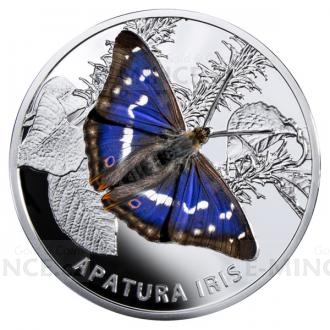 is the sixth coin in the series "Butterflies", in which the following coins have been issued: "Apollo", "Large Blue", "Scarce Copper", "Old World Swallowtail" and "Goliath Birdwing".

A great gift for all lovers of biology!

Reverse:
In the central part of the coin – a stylized image of a butterfly against a plant in the background. On the right side, at the bottom, along the rim – an inscription: APATURA IRIS (the name of the butterfly in Latin).

Obverse:
In the central part of the coin – the coat of arms of the Republic of Belarus. Around the coat of arms - an inscription: РЭСПУБЛIKA БЕЛАРУСЬ, Ag 925 (the designation of metal and its hallmark), 2013 (the year of issue). On the right side – the mint mark M/W. Along the rim, at the bottom – an inscription: 20 РУБЛЁУ (20 roubles; the face value). In the background – a stylized image of a piece of a butterfly wings.

The Purple Emperor (Apatura iris) - a beautiful butterfly with shimmering blue wings having a wingspan of about 50 mm. The male wings are black and brown with dark sheen on the top, whereas female ones are black and brown. Due to this colouration they blend with the background of the crowns of trees while hanging on branches. Purple Emperors like moist places, so they eagerly fly down to the banks of pools and streams. The Purple Emperor can be encountered in Central Europe. Its range reaches as far as the southern part of the United Kingdom to the west and the Amur River to the east. Because of its lovely appearance, these butterflies used to become a frequent prey to collectors. Today the Purple Emperor is a rare species, more and more difficult to observe.