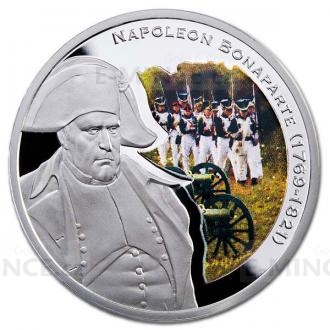 To commemorate the 198th anniversary of the Battle of Borodino the Mint of Poland stroke 2 coins dedicated to the outstanding military leaders, Napoleon Bonaparte and Mikhail Kutuzov. The coins are add to the “Great Commanders” international collection, already featuring the coins manufactured by the Kazakhstan Mint, “Chingiz Khan” and “Attila the Hun”.

The “Napoleon Bonaparte” coin was released on 30 September 2010. The pieces have been stroken in a limited mintage, with proof quality, on blanks of silver Ag 925, using the pad printing technology. They are offered to buyers in dedicated presentation case.

On 5-7 September 1812 two great leaders, Napoleon Bonaparte and Mikhail Kutuzov, met on a battlefield. As a result of the Battle of Borodino the French Emperor defeated the Russian army. However, the losses on both sides were incredibly high. The Russians lost some 50,000 troops and the French some 35,000. The heavy losses sustained by the French cavalry and the refusal to use the Imperial Guard made it impossible to pursue the retreating Russian troops. Napoleon then took Moscow on 14 September 1812, but the prime goal of the campaign, which was to destroy the Russian army in a major battle, was not accomplished, and it soon resulted in a general defeat in Russia. Faced with a coming winter Napoleon had to order his troops to retreat and it was then that most of his army was destroyed. At that time, Mikhail Kutuzov was named the architect of Napoleon’s failure, and using so-called “scorched -earth” policy demonstrated the effects of strategic retreat, maneuvers and counteroffensive action.

Obverse:
In the central part of the coin: an image of Les Invalides, the cathedral where the Napoleon's tomb is placed. At the top, on the right side, face value – 1 Dollar; on the left an image of Elizabeth II Queen. Beneath it – mint’s mark (M/W) and year of issue 2010. Along the rim – inscriptions: ELIZABETH II, NIUE ISLAND, DOLLAR.

Reverse:
On the left side – an image of Napoleon Bonaparte, at the background – extracts of staging of the Battle of Borodino - an image of marcher soldiers with a firearm and an image of two cannons. On the right side, along the rim - inscriptions: NAPOLEON BONAPARTE (1769-1821).