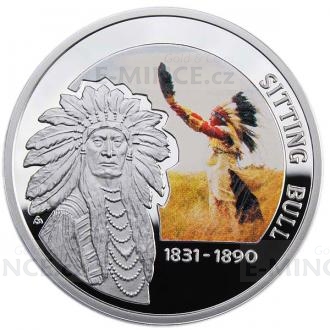 “The Sitting Bull” is a fifth coin in the „Great Commanders” series. The Mint of Poland has decided to depict the greatest and the most heroic and charismatic commanders on collector coins. The series already includes the coins: “Napoleon Bonaparte”, “Mikhail Kutuzov” as well as the coins manufactured by the Kazakhstan Mint, “Chingiz Khan” and “Attila the Hun”.

The Sitting Bull was a notable Chief and shaman of Sioux Nation. He sacrificed his life fighting with the white men. History also remembered him as an enslaved actor who join Buffalo Bill Cody’s Wild West show as a Show Indian.

Obverse:
In the central part – the effigy of Her Majesty Queen Elizabeth II with the mint’s mark (m/w). Around it – ornaments with Indian’s symbols. At the top – an inscription: NIUE ISLAND. On the left – an inscription: ELIZABETH II. On the right – the year of issue (2010). At the bottom – the face value (1 dollar).