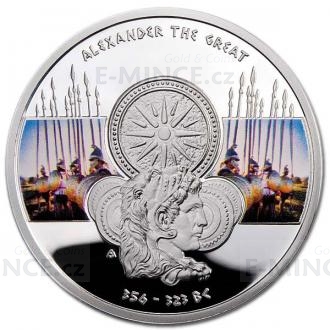 “Alexander the Great” is a sixth coin in the „Great Commanders” series. The Mint of Poland has decided to depict the greatest and the most heroic and charismatic commanders on commemorative coins. The series has already included the coins: “Napoleon Bonaparte”, “Mikhail Kutuzov”, „Sitting Bull” as well as the coins manufactured by the Kazakhstan Mint, “Chingiz Khan” and “Attila the Hun”.

He was only 20 years old when he inherited the throne of Macedon. The time of his reign encompassed 12 years of building a great empire; it is also the story of a man who demonstrated unusual sensitivity while showing no scruple when fighting to maintain power. The reason of his death hasn’t been fully explained and is still a mystery for many historian. Alexander the Great was definitively an outstanding strategist, and one of the greatest conquerors in history.

Alexander the Great coin was struck on blank of Ag 925, in low mintage – up to 5,000 pieces, in proof quality.

Obverse:
In the central part of the coin a decorative motif taken from a vase painting, well known from the Alexander the Great times, showing fighting hoplites. At the top, the image of Her Majesty Elizabeth II, and the mint’s mark (m/w), surrounded by a Greek ornament. At the sides, semi-circular inscription: NIUE ISLAND (issuer). At the bottom the face value: 1 DOLLAR.

Reverse:
In the central part of the coin the image of Alexander the Great – the warrior, taken from preserved coins of the era, and shields featuring the leader’s coat of arms. In the background, in the pad printing technology, the commander’s army in the Macedonian phalanx formation. At the top, an inscription in English language: ALEXANDER THE GREAT, at the bottom, years of Alexander’s life: 356-323 BC.