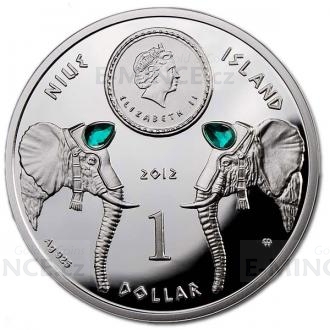 “Hannibal Barkas” is an eight coin in the „Great Commanders” series. The Mint of Poland has decided to depict the greatest and the most heroic and charismatic commanders on collector coins. This international series already includes the coins produced by the Mint of Poland: “Napoleon Bonaparte”, “Mikhail Kutuzov”, ”Alexander the Great”, “Sitting Bull” as well as the coins manufactured by the Kazakhstan Mint: “Chingiz Khan”, “Attila the Hun” and “Tomyris”.

Hannibal Barkas lived between 247 - 183 BC. He was a commander of the army of Carthage during the Second Punic War. Took his place in history as one of the greatest strategists of ancient times.

Obverse:
At the top of the coin, in front of the Carthaginian buckler- the effigy of Her Majesty Queen Elizabeth II. In the centre – the face value: 1 dollar. On both sides – images of war elephants, that Hannibal was using during his military expeditions. On their heads – protective armors, which are decorated with zircons in the shape of teardrops. Under the elephants - the mint’s mark (m/w) and the alloy (Ag 925).

Reverse:
In the central part of the coin – the images of warriors astride elephants. In the background – the line of the Alps, through Hannibal conducted his army to Italy. Below – the years of life of the commander “247-183 BC”. At the top – an effigy of Hannibal Barkas, taken from an ancient coin. The inscriptions: on the left “HANNIBAL”, on the right: “BARKAS”.