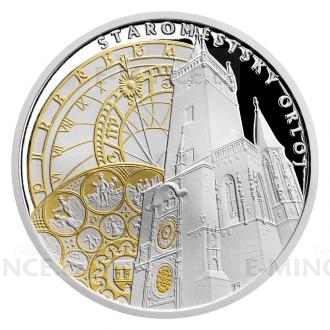 The Prague Astronomical Clock, which is admired by millions of tourists from all over the world, has become the motif of the Czech Mint's silver coin beautified by selective gilding from a free cycle dedicated to Prague historical sights.

The history of the instrument, which measures not only time but also the position of celestial bodies, dates back to 1410. Therefore, the Prague Astronomical Clock is one of the oldest in the world. It gives a unique evidence of the technical skills of medieval watchmakers and it is a unique work of art that combines many different styles - from Gothic to Romantic. The Prague Astronomical Clock is also surrounded by a number of legends that say that its existence is connected with our homeland. When the painter Josef Mánes received a contract to create the astronomical clock's calendar plate to complement the astronomical dial, his colleagues tried to discourage him. According to the prophecy, madness awaited everyone who worked on the astronomical clock. However, the disaster was not only a threat to the artist himself - the astronomical clock had not worked for centuries, and if it worked, the Czech lands would be hit by a disaster. Manes ignored the warning and created a monumental allegory of twelve months. Whether it was a coincidence or a real curse, the prophecy came true - the astronomical clock was finally put into operation in 1866, when the Prussians invaded Bohemia, the cholera epidemic started and the painter was afflicted by mental illness…

The reverse side of the coin, which was processed by the medal maker Petra Brodská, DiS., is dominated by the Old Town Hall Tower from the south view and the astronomical clock face and calendar plate are highlighted by selective gilding. The reverse composition is supplemented by details of both sets, which are also gold-plated, together with an inscription THE PRAGUE ASTRONOMICAL CLOCK. Since the coins are issued with a foreign license of the island of Niue, the obverse side bears its necessary attributes - the name and the portrait of Queen Elizabeth II, the nominal value of 1 DOLLAR and the year of the issue 2020.

The Infant Jesus of Prague, Charles Bridge, the National Theater, together with the Prague Astronomical Clock appear in the cycle of Prague sights.