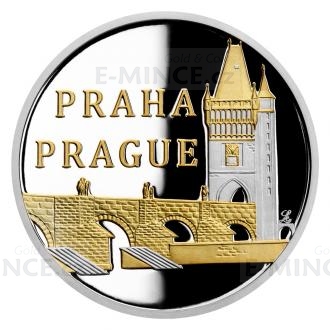 Charles IV. was a monarch thanks to whom our capital city has not ceased to bask in the glory even after centuries. The Charles Bridge became one of his most famous achievements. The Czech Mint used it as the main motif of the silver coin beautified by selective gilding from a free cycle of Prague historical sights.

Prague is divided by the Vltava River. Although it would seem that the city which was an important metropolis already in the 10th century had to abound with a wealth of bridges that would facilitate travel and trade, it was not true. The Charles Bridge was the only bridge across the Vltava river in Prague until 1845. Firstly, there was a wooden bridge, but poorly resisted water, therefore, a stone bridge - one of the oldest situated in the north of the Alps - was built in the second half of the 12th century and named after Judith - the wife of Vladislav II. Even the stone building eventually succumbed to floods, but it did not take long and Charles IV. decided to build a replacement in 1357. The bridge, which was first known as Stone or Prague bridge and as Charles bridge only from the 19th century, is over half a kilometer long, connects the Old Town with the Lesser Town and is an extraordinary art gallery, decorated with thirty Baroque statues and sculptures. Charles Bridge has become an important part of Europe's trade routes, the site of the martyrdom of St. John of Nepomuk and the battle with the Swedes. It attracts millions of tourists from around the world every year…

The reverse side of the coin, which was processed by the medal maker Ludmila Kracíková, DiS., is dominated by a view of Charles Bridge with its gothic Old Town Tower and the bilingual inscription PRAHA - PRAGUE. Selected parts of the relief are embellished with gilding. Since the coins are issued with a foreign license of the island of Niue, the obverse side bears its the necessary attributes, which means the name and the portrait of Queen Elizabeth II, the nominal value of 1 DOLLAR and the year of the issue 2020.

Infant Jesus of Prague, the Old Town Astronomical Clock, the National Theater, together with Charles Bridge appear in the cycle of Prague sights.