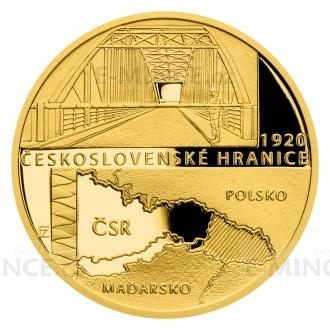 The borders that separate the state from its neighbors are not just a line on the map. They meet unique orders and cultures, whose interests are often quite different. This was manifested after the end of the First World War, when the political map of Central Europe was shaken to its foundations. The borders of the newly established Czechoslovakia with Austria and Germany were mostly solved by the historical law. However, there were no historical borders with Hungary. The northern borders of Slovakia created the Tatras, however, the borders of the southern areas were unclear because there were a lot of various nationalitites. However, the Czechoslovaks benefited from the fact that they were on the side of the victorious powers and the dissatisfied Hungarians, who did not respect the limits, had to be hit by the Czechoslovak army, supported by the Romanian allies. Another dispute was about the Carpathian Ruthenia, which voluntarily decided to join Czechoslovakia, but its territory was claimed not only by the Ukrainian National Republic, but also by Hungary. Again, the situation had to be resolved by the intervention of the friendly armies of Czechoslovakia and Romania. Poland also demanded part of Czechoslovak territory.

Disputes broke out over Orava and Spiš in Slovakia. In Silesia there were disputes over Těšínsko, where Czechoslovaks and Poles clashed in the so-called Seven-Day War. The borders of Czechoslovakia were stabilized in 1920, but it did not last long and they became the subject of disputes that served as one of the pretexts to unleash World War II ...

Academic sculptor Zbyněk Fojtů became the author of the miniseries and divided the reverse side of the coin into two halves separated by the inscription CZECHOSLOVAK BORDERS 1920. The lower half is formed by a map of Czechoslovakia situated between Poland, Hungary and Romania. The upper half is dedicated to depiction of Elisabeth Bridge that withstood the era of Czechoslovak-Hungarian fighting and which still connects Slovak Komárno with Hungarian Komárom… Since the coins of the Czech Mint are licensed by a foreign publisher, the island of Niue, their obverse side bears its necessary attributes, which means the portrait and the name of Queen Elizabeth II, the nominal value of 10 DOLLARS (NZD), and the year of the issue 2020. The composition of the obverse side is supplemented with linden branches and a tricolor that permeates the entire mini-series.

Remember that you can store the complete mini-series in a wooden collector's etui, which you can also find in the offer of the Czech Mint.