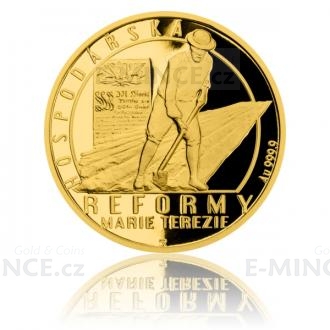 The second gold coin of the four-part miniseries Reforms of Maria Theresa, issued on the occasion of the 300th anniversary of the birth of an enlightened monarch, commemorates her significant strides in the economy.

Maria Theresa was right at the beginning of her reign led into a series of conflicts for power, which resulted in lost of the Silesia area.  She was not going to accept the loss of a significant area and wanted to reconnect it to her empire. But that required a number of reforms, that would have made a real superpower from the rigid monarchy. Many of them were related to land - the Theresian cadastres were gradually created, thus a land register. Also came the register of houses, to which numbers were allocated, and the  residents were given surnames in addition to their forenames. This progressive land and vassal reform became known as Raabization (named after the Austrian economist and court council of Maria Theresa), which consisted of parceling the land among the peasants, labor constraints and the replacement of cash benefits levied to the authorities. The changes were beneficial - among other things, there was an increase of the efficiency of agricultural production, an increase of fertility, the creation of hundreds of new villages in Bohemia and Moravia and a reduction in peasant rebels. Besides agriculture, the state also became aware of growing importance in industrial production - it supported the establishment of factories and business in all its forms.

The author of this gold coin is a young medalist Roman Shamilyan, DiS. Its reverse side  presents the Teresian peasant with a hoe, preparing a furrows in the field. The scene is complemented with a decree of the Empress and an inscription REFORMY MARIE TEREZIE – HOSPODÁŘSKÁ /Reforms of Maria Theresa  - economic/. The Czech Mint issues its own commemorative coins under license of the island of Niue, and the obverse side thus bears his attributes: the name and portrait of Queen Elizabeth II., which is surrounded by decorative ornaments, the year of issue 2017 and the nominal value of 10 DOLLARS (NZD)

Do not miss the collectible box adorned with a thematic engraving, which holds the entire miniseries - you can find it in the menu of the Czech Mint.