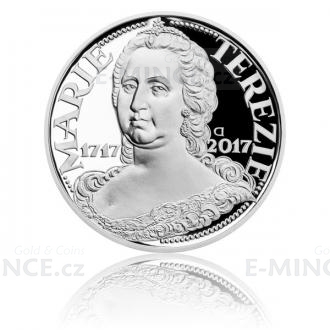 On 26 April 2017 the Czech National Bank is putting into circulation a CZK 200 commemorative silver coin to mark the 300th anniversary of the birth of Maria Theresa. The coin is minted from an alloy containing 925 parts silver and 75 parts copper and is issued in two versions, normal quality and proof quality, which differ in surface treatment and edge marking. Proof-quality coins have a highly polished field, a matt relief and a plain edge with the inscription in Czech “ČESKÁ NÁRODNÍ BANKA * Ag 0.925 * 13 g *”. Normal quality coins have milled edges. The coin is 31 mm in diameter, weighs 13 g and is 2.3 mm thick. As with any other coins, deviations in diameter of 0.1 mm and thickness of 0.15 mm are allowed. Upward deviations in weight of 0.26 g and silver content of 1% are permitted.

The obverse side of the coin depicts the upper part of the imperial eagle with a crown. The body of the eagle is covered by a vertical oblong inscription plate containing the mottos in Czech “ŠKOLSTVÍ” (EDUCATION), “DANĚ“ (TAXES), “MĚNA” (CURRENCY), ”ROBOTNÍ PATENT” (ROBOT PATENT), “STÁTNÍ SPRÁVA” (STATE ADMINISTRATION) and “MÍRY A VÁHY” (WEIGHTS AND MEASURES). The mottos are separated by dots. Located around the outer circle are the name of the state in Czech “ČESKÁ REPUBLIKA” and an incomplete double-lined astragal. The denomination of the coin “200” is situated on the eagle’s heraldically right wing, with the abbreviation of the monetary unit “Kč” below. The Czech lion is placed on the eagle’s heraldically left wing. The mark of the Czech Mint in the form of the letters “Č” and “M” is located between the lower part of the heraldically right wing and the inscription plate. The reverse side of the coin features a portrait of Maria Theresa. Written around the outer circle is the text “MARIE TEREZIE” complemented by an incomplete astragal. The middle of the coin field contains the year “1717” to the left of the portrait and the year “2017” to its right. The initial of the designer of the coin, Vojtěch Dostál – in the form of a reversed letter D – is situated above the year “2017”.

Each coin comes with a yellow catalogue card containing a description and the relief of the coin.