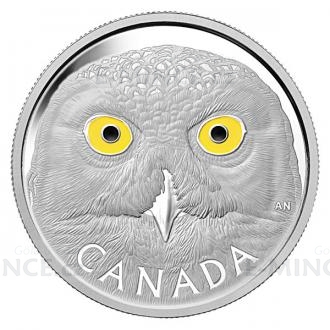 Few animals can match the owl for the intensity of its gaze, and the eyes of the snowy owl are further distinguished by a third diagonal eyelid that protects them from the Arctic wind and bright sunlight. Contrary to common belief, owls can see day or night, an ability that is particularly important for the snowy owl, which must hunt under the midnight sun of the Arctic summer.

Unlike other birds, an owl's eyes are located on the front of its head, an adaptation that heightens its depth perception for targeting prey, which it can spot over tremendous distances. Owls cannot roll their eyes the way humans do: they are fixed in their sockets. This is yet another intriguing adaptation that produces the signature way owls turn their heads—as much as 270 degrees in either direction before fixating on their prey.

First in a 3-coin annual series. Don't be disappointed, order your coin today before they're all gone!

Special features:
• The addition of bright yellow and black enamel on your coin gives added depth to the owl's eyes and contrasts the softly frosted feathers of its face.
• A FIRST: Your coin is first in a 3-coin annual series celebrating the striking eyes of Canadian wildlife
• Your detailed coin celebrates the snowy owl, a strikingly beautiful bird of prey inhabiting much of Canada's North.
• A striking addition to your Canadiana-, bird- or nature-themed collection.
• Your coin is 99.99% pure silver with a limited worldwide mintage (source: Canada Mint).