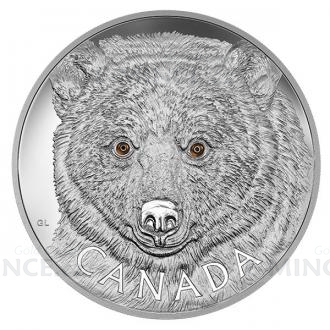 Previous coins in series SOLD OUT! Hurry and order yours today!


In all the world, only one place harbours the elusive spirit bear: the coast of British Columbia. Here, where the vast waters of the Pacific meet the Coastal Mountains, the spirit bear dwells among thousand-year-old cedars. Hold its haunting gaze in the palm of your hand and be transfixed! This is the third coin in the Royal Canadian Mint's sold-out annual series featuring enamel-enhanced portraits of beloved Canadian animal species.

It is a rare honour to see a spirit bear in the wild, a distinction that is reflected in the exclusive mintage of this extraordinary coin. Only 500 are available worldwide, and every one of them has been painstakingly crafted with exquisite detail and selective enamel to capture the powerful and haunting gaze of this legendary bear.

An exceptional opportunity not to be missed as previous coins have quickly sold out! Order your coin today!
Special features:

Your coin is the third coin in the series of 99.99% pure silver 1-kilogram coins featuring selective enamelling.
Design, colour, and engraving intersect to stunning effect in this rendering of Canadian wildlife artist Glen Loates' Kermode bear portrait.
FEATURES SELECTIVE GOLD-TONED ENAMELLING! Each strand of the bear's unique pale fur is engraved in the finest detail, while the elegant animal's intense stare is enhanced by amber-toned enamel.
PRESENTED IN A BRANDED MAPLE WOODEN BOX! Your coin is encapsulated and presented in a Royal Canadian Mint-branded maple wooden box!
Your coin is GST/HST exempt with an extremely limited worldwide mintage.

About the Design:
Designed by Canadian artist Glen Loates, your coin features a detailed portrait of the white-furred black bear known as the Kermode bear or spirit bear of British Columbia's coast. The bear's face dominates the entire reverse field of the coin, its intense eyes taking centre stage as it seems to stare directly at the viewer. The bear's dark nose and mouth, dense fur, and stunning brown eyes are given dimensional detail using various engraving and shading techniques. The eyes make an even greater impact with the application of amber-toned enamel irises and black pupils.

Did you know…
Biologists continue to explore how the bear's genetic trait arose, some postulating that the light pelt was an adaptation to the glacial environment during the last ice age.
The Kermode's white fur might offer an advantage in fishing. Though black-furred bears and Kermode bears catch fish at similar rates at night, the fish are significantly less fearful of the white-furred bears than their black-furred counterparts during the day—perhaps not registering the Kermodes as predators. The trait thus gives spirit bears an edge in the never-ending competition for food.
Nearly anywhere else where the North American black bear is found, there is a 1 in 1,000,000 chance of it being born with white fur. In central and northern British Columbia outside of the coastal islands where the subspecies is concentrated, about 1 in 40 is born with white fur. But on these coastal islands, probably because the subspecies has been geographically isolated for millennia, one in ten black bears is born with white fur. On Gribbell Island in particular, the odds of a black bear having white fur may be as high as 1 in 3.
The Kermode's nomenclature is derived from the surname of Francis Kermode, a key researcher of the subspecies and a former director of the Royal British Columbia Museum.


Packaging:
Your coin is encapsulated and presented in a Royal Canadian Mint-branded maple wooden box with a black beauty box. (source: http://www.mint.ca)