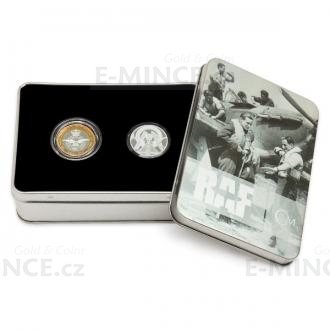 The British Royal Air Force was established in 1918 and became the first independent air force in the world. A commemorative set is being launched on the occasion of the 100th anniversary of the RAF Founding as the history of Great Britain and Czechoslovakia crossed each other in the 20th century. It consists of one silver coin of the Czech Mint and one silver coin of the Roayl British Mint.

After the break-up of Czechoslovakia and the establishment of the Protectorate of Bohemia and Moravia in 1939, our pilots had hardly reconciled to the fate of their homeland, and were therefore seeking a way to fight the evil of the Nazi Third Reich abroad. Although they were very successful in the air and joined the elite fighters, the battle for Poland and France did not last long. After their fall, the German aggression started to focus on Great Britain. Czechoslovak fighters and bombers flew to help and were quickly integrated into the RAF. They were distinguished during the Battle of Britain during the Second World War, and the islanders today are reluctant to admit that without their Slavic heroism, their kingdom would not exist. The courage of our crew members was all the greater that in the case of shooting down and captivity, unlike other pilots, they were not considered prisoners of war, but - as citizens of the German-dominated Protectorate - they were treacherous. Nevertheless, two thousand men and women have signed up for the Royal Air Force service and are still remembered today at home and abroad.

The coin of the Czech Mint was made by an academic sculptor Zbyněk Fojtů, from whose studio there were already 13 excavations with RAF themes. The centuries-old Air Force history has been expressed on the reverse side through three airplanes from different stages of the RAF's existence. The era of founding is represented by Bristol F.2 Fighter, the Battle of Britain is symbolized by Supermarine Spitfire and the present is expressed by Eurofighter Typhoon. The text placed in the RAF sign says 100 YEARS OF THE RAF. Since the coin of the Czech Mint is based on the foreign license of the island of Niue, the obverse side carries its necessary attributes, which are the portrait and the name of the emperor Elizabeth II, the nominal value of 1 DOLLAR (NZD) and the year of the issue 2018.

The bicoloured coin (Circuit Gilded) of the British Mint was made by Rhyse Morgan. The reverse side is dominated by the RAF sign, which presents the eagle, the royal crown and the Latin phrase "PER ARDUA AD ASTRA" translated as over obstacles to the stars. The inscription bears the years 1918-2018, THE 100TH ANNIVERSARY OF THE ROYAL AIR FORCE. The obverse side of the coin belongs to the attributes of the issuer, which is the United Kingdom and carries the profile of the Emperor Elizabeth II, the text of ELIZABETH II D G REG F (the Elizabeth II of the Queen's Divine Grace, the Defender of Faith), together with the nominal value of TWO POUNDS (GBP).

The commemorative set of the Czech Mint and the British Mint, which is the Czech Mint´s official partner, comes in a mere 400 pieces. It is stored in an exclusive box with a special certificate of authenticity.