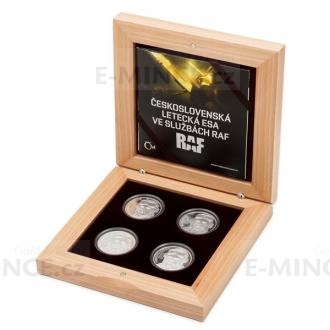 The Czech Mint pays tribute for the third time to the Czechoslovaks who served in the Royal Air Force during the Second World War. The symbols and aircrafts of the Czechoslovak RAF wings are continued with our most successful airmen - the so-called air aces in this set of four silver coins.

Who can boast the prestigious title "aero ace"? Each fighter pilot who shot down 5 or more enemy planes. It is no wonder that a great number of Czechoslovaks escaped to the west in order to avenge the Nazis for the occupation of their homeland, including these heavenly riders:

The fates of Czechoslovak aces were different - some fought in France, others were given the opportunity to shine in the sky above Great Britain. Some of them fell in battle, others returned to their homeland. Finally, their leaders turned their backs on them. However, their courage will never be forgotten. The set of silver coins was made by the expert medal maker and sculptor Zbyněk Fojtů, who also worked on the four-aircraft set for the war cycle. The reverse sides of the four coins belong to four charismatic portraits of fighter pilots in masks. The inscriptions give the names of individual air aces and a mosaic in the form of small squares are in fact an enumeration of their certain victories. The obverse side is common for all four coins, hence it is dominated by a detailed depiction of the cockpit controls from the legendary Hurricane fighter. The rest of the obverse side belongs to the attributes of Niue Island (the issuer that allows the Czech Mint to coin its own coins), i.e the name and portrait of Queen Elizabeth II., the year of issue, 2017, and the nominal value of 1 DOLLAR (NZD).