You are here:Home»Czech & Slovak»Czech Mint 2018»Gold coin Period of George of Poděbrady - Husband and Father - proof 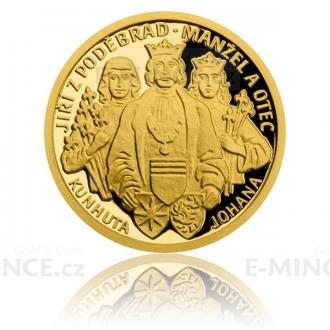 George of Poděbrady was twice married and had ten children. Thanks to a marriage policy, he established strong relationships with many powerful noble families, and continued in an effort to bask the Czech Kingdom in the glory. Therefore the final gold coin of the Czech Mint from the period of George of Poděbrady miniseries belongs to the king in the role of husband and father.

The double family role of George of Poděbrady is difficult to express in the coin at the same time. It includes two generations and a total of thirteen people. George had seven children with his first wife Kunhut of Šternberk, who died before her husband became the king. Their daughter Catherine became the Queen of Hungary and the first wife of Matthias Corvinus, the future enemy of George of Podebrady. Catherine's brother, Henry the Elder, founded his own Minsterberg dynasty for change. George had three other descendants with his second wife Johana of Rožmitál, who was crowned by the Czech queen alongside her husband. Despite being of a different faith, the relationship of the royal couple was full of love and mutual respect, and Johanne built her husband's legacy long after his death. Their son Hynek entered the history as a well-known writer who brought the fresh wind of the Renaissance into medieval Czech literature.

The reverse side of the coin, which has traditionally been prepared by an expert on historical themes and academic sculptor Michal Vitanovský, is dominated by three figures with three coats of arms. The middle figure belongs to King George and the coat of arms belongs to his dynasty Lords of Kunštát and Poděbrady. Two other characters belong to George's wives. "Because of the lack of period imagery, both designs are fictitious portraits on this proposal. Both women are accompanied by coats of arms, their first names, and the crown on the head of Queen Johanna differs them. The proposal waives the names of numerous children. There are symbolic lily flowers in the hands of mothers, while seven of them are held by Kunhuta, three by Johanne," explains Michal Vitanovsky. The composition of the reverse side was closed by the inscription GEORGE OF PODĚBRADY – HUSBAND AND FATHER. Since the commemorative coins of the Czech Mint are based on the license of the island of Niue, their reverse side carries its necessary attributes, which are the portrait and the name of Queen Elizabeth II, the year of the issue 2018, together with the nominal value of 5 DOLLARS (NZD). These features are complemented by four decorative gothic circles.

The complete collection of four coins that presented George of Poděbrady in the roles of the King of Two Peoples, Diplomate of Peace, controller of the Kingdom and husband and father, can be stored in a luxury collector's etui.