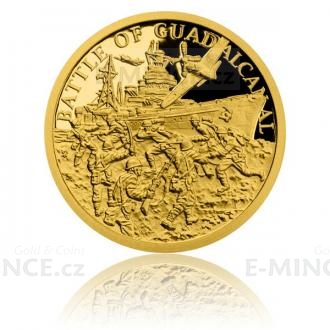 Even though the bowls of weight in the Second World War were finally set in favor of good 75 years ago, however, it was still far from being won. The miniset of gold coins of the Czech Mint "War Year 1943" opens victory in the Battle of Pacific Guadalcanal.

When the Japanese fleet was destroyed in the Battle of Midway in 1942, it lost its aircraft carriers, which played a crucial role in fighting in the vast Pacific waters. The Imperial Army had to rely on the Ground Air Force, whose spine became the mountainous island of Guadalcanal. The action radius of the machines departing from this insignificant piece of land was sufficient to cover the planned offensive operations and, moreover, threatened shipping routes between North America, Australia and New Zealand. The Americans could not tolerate this threat and decided to seize the island. The naval infantry landed on Guadalcanal on August 7, 1942, and launched the battle that had been fought at sea, in the air and on the land for six months. The airport was quickly dropped, but the rest of the island was full of Japanese soldiers. Long fighting in the tropical jungle changed into hell. Maneuvers, illness, lack of food and sleep, fear and constant vigilance were the daily bread of the men who had to clear the island from the imperial soldiers. The fanatical determination to win and observe the ancient Japanese code of honor proved the so-called "banzai attacks", when the masses of Japanese soldiers armed with only bayonets and Samurai swords threw themselves against American machine-gun positions behind the traditional banzai shout called "ten thousand years".

The banzai attack has become the main motif of the reverse side of the commemorative coin made by duo artist Asamat Baltaev, DiS., and academic sculptor Nikolay Baltaev (son and father). The American Marines mingle with the Imperial soldiers in the battle turmoil. The background is dominated by the American battleship, threatened by the Japanese aircraft. The English inscription then lists BATTLE OF GUADALCANAL. The commemorative coins of the Czech Mint are based on the license of a foreign issuer, which is the Pacific island of Niue. The obverse side therefore bears its necessary attributes, which are the name and the portrait of the Emperor Elizabeth II., the nominal value of 5 DOLLARS (NZD) and the year of the issue 2018. The reverse side is common to the entire miniseries and the Queen's portrait is surrounded by the great US and USSR awards, which are Silver Star and Order of Fame.