You are here:Home»Czech & Slovak»Czech Mint 2018»Gold coin Period of George of Poděbrady - Homesteader of the Czech Kingdom - proof 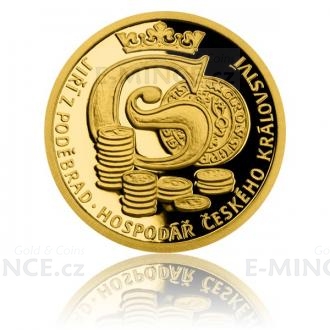 The last truly Czech King, in his miniseries George of Poděbrady, introduced himself as a visionary who longed for peace inside and outside his country. The third gold coin of the Czech Mint commemorates him as the King of the Czech Kingdom.

Although he did not get a good education from Jiří Poděbrady, he was a reasonable and practical economist. His economy has been renowned and has been successful in ensuring the welfare of his homeland and the satisfaction of its inhabitants. How did he do when the country was ravaged by Hussite wars? Paradoxically, the conflict itself has helped. During the Hussite wars, the property was wrongfully seized by the Church. After the war, it was no longer back, and about a third of the country returned to the economic cycle. The foundation of the power of the former rulers was silver, but Kutnohorské mines were ravaged by King Zikmund. However, Jiri restored them and planted the minting of Prague groshes. He developed crafts, introduced tariffs and market regulations, and supported the trade routes that connected Czech countries with foreign countries. He invited foreign counselors to help him recover the economy and stabilize the currency conditions. In spite of all the efforts of the king, however, the economic situation of the Czech Kingdom finally worsened. However, the causes were almost unreservedly external. It included foreign inflation, but also the military and political attacks that George of Poděbrady tried to prevent by skilled diplomacy.

"The proposal presents the initials "G"- like Gyrzy - with the crown and the Prague groschen with George of Poděbrady in the background. The king's economy expresses the differently high columns of the coin counts," describes its author and the academic sculptor Michal Vitanovský the reverse side of the mintage. The commemorative coins of the Czech Mint are issued under the license of a foreign publisher, which is Niue Island, and their obverse side therefore bears its necessary attributes, which are the name and the profile of Queen Elizabeth II., the nominal value of 5 DOLLARS (NZD) and the year of the issue 2018. This also includes the decor, which means four gothic crucifixes with lilies.

All four coins of the miniset have their place in a luxurious collector's box, which you can also find in the offer of the Czech Mint.