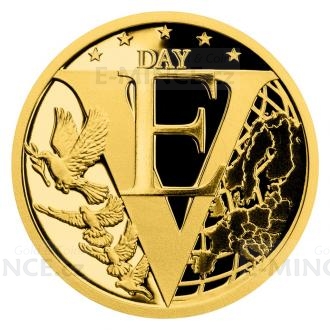 We celebrate the 75th anniversary of the end of World War II in 2020. The first gold coin of the Czech Mint from the two-part miniseries commemorates the victory in Europe.

When exactly did World War II end in Europe? Opinions differ on this - for some on May 7, for another on May 8 or on May 9, 1945. Why the confusion? With the end of the greatest conflict in human history, it became clear that the world would be reorganized, and everyone wanted to gain the most favorable position in it. They wanted to persuade their Western enemies to sign a separate peace so that all their forces could be thrown into battle with the Soviet Union. It was a great idea for the West - the Soviets were rolling irresistibly into Central Europe, and it was clear that they would not leave after the war. Winston Churchill even commissioned a plan for an operation in which British troops, along with Polish exile units and German war prisoners, attacked the Red Army. However, this did not happen and the Third Reich was forced to sign an unconditional surrender. It happened on May 7, 1945 in Reims in France. Although the document was signed by a representative of the Soviet Union, Joseph Stalin did not recognize its validity. It bothered him that such an important act took place in a French city, which attributed a key role to the Western countries in the defeat of Germany, and that his country was represented by the insignificant Major General Susloparov. The German surrender was therefore repeated on May 8, 1945 in Berlin - at the site of Stalin's triumph with the participation of Marshal Zhukov. Due to various delays, the document was not signed until just before midnight in Moscow, which is located in a different time zone, therefore they celebrated Victory Day on May 9, 1945.

The reverse side of the coin, processed by Mgr. Art. Miroslav Hric, ArtD., Is dominated by the letters V and E, because the day of victory in Europe is known as V-E DAY in the world. The composition is supplemented with peace doves and a part of the globe depicting Europe. The letter V as a victory also evokes the arrangement of the obverse side. As it is a coin issued with a foreign license of the island of Niue, the obverse side bears the necessary attributes of this issuer - the name and the portrait of Queen Elizabeth II, the nominal value of 5 DOLLARS and the year of the issue 2020.

You can store coins, which will commemorate the victory in the Pacific after the end of the Second World War in Europe, in a stylish collector's box.