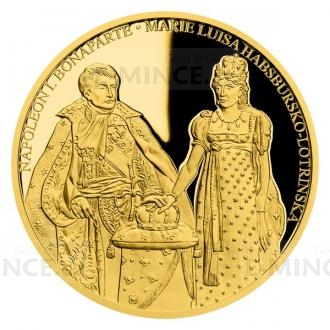 The Czech Mint traditionally dedicates gold double-ounce coins to well-known historical pairs. It is dedicated to Napoleon I. Bonaparte and Marie Luisa of Habsburg-Lorraine in 2020.

"He's a monster, a cannibal," the Austrian Archduchess Maria Luisa of the Hapsburg-Lorraine said when she was told to marry the most powerful man in the world - the French Emperor Napoleon Bonaparte. Their connection was drafted by Austrian Chancellor Metternich, who concluded that if he could not defeat the French, he would have to get in touch with them ... "I have to marry a belly that will bring me children," said Napoleon, who was looking for a new wife because his Josephine was unable to give him the heir of the throne. He did not mind that the Austrian woman was not kind of beauty. "If she is good and nice and gives me healthy boys, I will love her as if she was the most beautiful woman," the Frenchman said. Being twice as old as his upcoming, he left nothing to chance and wanted to make the best impression - trying to lose weight and learning the Viennese waltz. The welcoming event in Paris was ready to the smallest detail, but Napoleon was unable to tame his curiosity, so he set out to meet his bride already in the carriage. He tried to fulfill her every wish after the wedding, and when he found out she was pregnant, he didn't move away from her. When Marie Luisa was giving birth to their child, the doctors told the emperor that they could save only the mother or the child. Napoleon ordered to save Maria Luisa, but eventually their son survived. However, Napoleon´s happiness lasted only briefly. The campaign to Russia ended in disaster, and the defeat at the Battle of Nations near Leipzig destroyed the French plans to rule the world. Napoleon lost not only his empire but also his family. Marie Luisa did not intend to accompany her husband in exile and returned with her son to Vienna. Napoleon never saw them again ...

The reverse side of the coin was processed by Mgr. Art. Miroslav Hric, ArtD. It is dominated by the French imperial couple. Both husband and wife dressed in sumptuous dresses hold hands on the crown and touch each other. Despite this fact, there is a distance between them. The inscription bears their full names NAPOLEON I. BONAPARTE and MARIE LUISA HABSBURG-LORRAINE. Since the coins are issued with a foreign license of the island of Niue, the obverse side bears the necessary attributes of this issuer. These attributes are the name and the portrait of Queen Elizabeth II, the nominal value of 100 DOLLARS and the year of the issue 2020. This is supplemented with a decorative relief.

Two historical figures, two ounces of gold and only 200 coins!