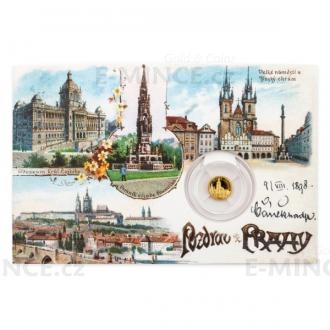 Czech Republic boasts many castles, but only one of them is a Castle with a capital C. The millennial Prague seat of Czech kings is the largest castle complex in the world, and now it gets the opposite record - it is the motif of the smallest gold coin minted in the Czech Mint weighing half a gram.

A mintage depicting the symbol of the Czech state is stored in a special package in the form of replica of rare vintage postcard with an inscription Greetings from Prague. It offers a view of the sights in Prague - the Prague Castle panorama, the Czech Kingdom Museum (now the National Museum), the Great Square (now Town Square) with Tyn Church and the Memorial of Emperor Franz (or the Kranner fountain). The original printed matter was  issued by the publisher Carl Schwager from Dresden, probably in 1897. It was a so-called lithographic postcard, thus the eldest type of postcards, whose work demanded an artistic processing and production, and that is most coveted by collectors. This particular correspondence card was sent on 9. 8. 1898 - on the address side is a representation of two kreutzer franked stamp of Emperor Franz Joseph I, along with a simple address, which consists of only the name of the café and the city, and demonstrates the high reliability of the former Post.

The author of the visual image of this gold coin is a talented medaillist Irena Hradecká, DiS. She dedicated the reverse side to the castle panorama and Czech-English inscription PRAHA - PRAGUE. The obverse then belongs to the attributes of the island of Niue, which provides a license for the Czech Mint to issue commemorative coins: the effigy of Queen Elizabeth II., the year of issue 2017 and the nominal value 5 DOLLARS (NZD).

This gold mintage in the form of a coinage letter is an original and accessible collectible piece and a valuable gift or a regional attention.