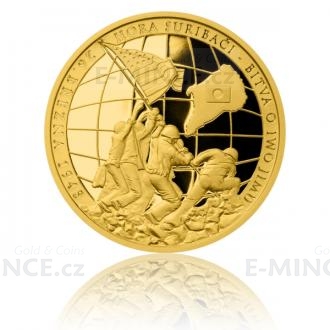 Iwo Jima – a small and virtually insignificant island before the war which was home to roughly one thousand inhabitants became the scene of the one of the bloodiest battles of the Second World War. The five-day victorious battle of the American army and its alllies against the resolute Japanese army resulted in tens of thousands of casualties on both sides. The brutal assault which began on  February 19th, 1945,is the subject of a new issue from the End of the Second World War series, prepared for coin collectors and history buffs by the Czech Mint.

The United States entered the Second World War following the attack by the Imperial Japanese Navy on the naval base in Pearl Harbor. It then began to repair the damage caused by Japan and reclaimed a large part of Southeast Asia and a number of islands in the Pacific. One of these happened to be Iwo Jima, which at the time served the Japanese as a strategic airstrip. 70,000 American soldiers boarded ships and attacked the island in two waves. The enemy commander Kuribayashi had “only” 21,000 men available and it was clear to him that fighting meant mass suicide. Nevertheless, his army demonstrated immense determination and ingenuity. They bravely defended their positions and attacked from underground tunnels and bunkers built under the Suribachi volcano. It took five days before the Americans and allies were able to cut off the volcano from the rest of the island.

The photograph taken by war photographer Joe Rosenthal showing six soldiers raising the American flag on the peak of Suribachi was seen round the world and has now also become the subject of the reverse of this new gold coin. While the enemy at that time had yet to be defeated, the photo gave the American troops strength and a much-needed boost for the rest of the several-week battle. The battle for Iwo Jima ended on March 26th, 1945, with enormous loss of life but victory for the American and allied army.

The designer of the 5 NZD Smart coin is sculptor and medal maker Jakub Orava, the artist behind all the templates of all the issues of the exceptional Czech Mint series End of the Second World War. The obverse is dominated by a likeness of Queen Elizabeth II along with the particulars of the coin and small crosses which mark the personal involvement of the ruler in the course of the war. The minting run for the Smart coin has been set at a mere 200 pieces. Considering the attractive subject and quality craftsmanship, a great deal of interest from collectors can be expected. So don’t wait and reserve your coin in time!