You are here:Home»World Coins»Niue»2015 - Niue 5 $ - The Liberation of Auschwitz Gold Coin - Proof 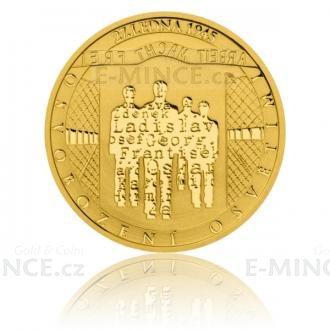 70 years ago, on 27 January 1945, one of the most horrifying chapters of WW2 was closed. On this day, the Soviet army liberated the largest Nazi concentration and extermination camp Oswiecim in Poland. Only 7,000 prisoners were saved. During the previous almost five years of the camp’s existence, more than one million people were executed here. To commemorate forever the liberation of Oswiecim Czech Mint issued a Smart coin made of pure gold.

Both sides of the gold coin were designed by talented yound artist Jakub Orava. Together with Czech Mint he cooperated with the Terezín Initiative Institute that pursues and supports research of the history of the “final solution” in Bohemia and Moravia and the history of the Terezín ghetto. Final version of the coin originated on the basis of talks with Dagmar Lieblová and Toman Brod, two survivors of the Oswiecim camp.

The reverse of the coin is dominated by the depiction of human figures stepping out of the notoriously known camp gate, with the ill known watchword Arbeit macht frei. “In my opinion the coin is also important, among other things, because to the two hundred people that will have it at home, it will remind eve after many years the horrible events and commemorate the victims. I have unfortunately, the impression, that people more and more forget what had happened 70 years ago“, said Anna Hyndráková, witness of the Terezín camp.