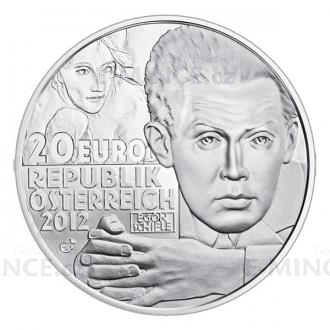 A unique collaboration between 14 European Union member states, the European Silver Programme is a series of commemorative 20 euro silver coins designed to celebrate common aspects of European identity. The theme chosen for 2012 is artists, which has provided the Austrian Mint with the perfect opportunity to pay homage to a painter who, along with his mentor Gustav Klimt, is the country’s most internationally revered.
Often referred to as the "20th-century Mona Lisa", Portrait of Wally features his lover, Valerie Neuzil, who modeled for many of his controversial paintings and shared his life until he married a more socially acceptable woman. Painted in 1912, it now forms part of the collection of the Leopold Museum in Vienna, home of one of the world’s most comprehensive Schiele collections. The picture is shown on the coin's reverse, while a portrait of the artist himself is depicted on its obverse.

With a maximum mintage of 50,000 in 900 silver Proof quality only, the coin comes in a protective box with slipcase.