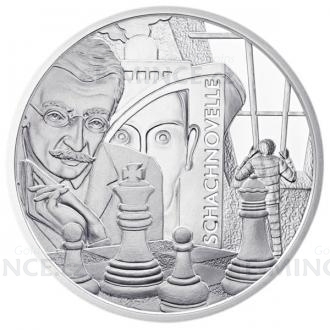 One of the world’s most popular writers between the two world wars, Austrian Stefan Zweig was also one of the thinkers who helped define the 20th century. A humanist and pacifist dedicated to making the world a better place, the author and his brilliant novella Chess are celebrated in Austria’s expertly crafted contribution to the European Silver Programme 2013, whose theme is European writers.

As a devout believer in an integrated Europe, Stefan Zweig makes the ideal subject for a coin celebrating common aspects of European identity, as the 20 euro silver coins from all the 14 countries participating in the European Silver Programme are designed to do. Born into a wealthy Jewish family in Vienna in 1881, he published his first book of poetry at the age of 19 before going on to find international fame with a series of novellas, including Chess. Set on a passenger steamer bound for Buenos Aires from New York – hence the depiction of a ship on the coin’s reverse bearing the book’s title in German on its prow – the disturbing story about obsession focuses on a chess game between the world champion and the other passengers. The book was published posthumously after Zweig took his own life in Brazil in 1942. He had tried in vain to settle there with his young wife, who committed suicide with him, after fleeing the advance of the Nazis in his beloved but devastated Europe.

With a maximum mintage of 50,000 in 900 silver Proof quality only, the coin comes in a protective box with slipcase.