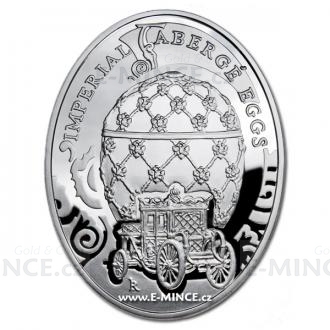 Imperial Fabergé Eggs, known also as Tsar’s Fabergé Eggs, are considered masterpieces of the jeweller’s art and a symbol of extravagance and luxury. Created by Peter Carl Fabergé and his assistants for tsars: Alexander III and Nicholas II of Russia, the eggs were made of gold and silver and decorated with enamels and precious stones.

The Mint of Poland presents a new series of coins dedicated to these extraordinary pieces of art. The first one of them is “Coronation Egg”.

Obverse:
At the bottom – open Spring Flowers Egg (1899-1903) with a miniature basket of wood anemones inside. Above – Niue Island’s Coat of Arms with the inscription “Elizabeth II” below. Around the head – decorative neorococo scroll ornament. At the top – issuer’s name: Niue Island. On the right – a nominal value of the coin, 2 dollars, on the left – year of issue:2010.

Reverse:
In the center – Coronation Egg from 1987 with a miniature coach, a replica of Catherine the Great’s coach of 1793 which was employed in the coronation procession of Tsar Nicholas II and Alexandra Fedorovna. At the the top – semicircular inscription – Imperial Fabergé Eggs. In the background – scroll matt ornament.

The Coronation Egg” is the most famous and the most precious Fabergé Egg of the entire collection. Nicholas II the tsar gave it to Empress Alexandra on Easter 1897. The creator of the Egg was George Stein, the most gifted jeweler of the Fabergé house. It took 15 months to create it. The egg is decorated with enamel yellow net over the gold surface which resembles the Empress’s dress. Inside the egg, there is a miniature of the coronation carriage made of gold, rubies, diamonds and rock crystals. On its roof, there is a tiny copy of the Romanov’s crown.

Currently, the egg is in the possession of New York Forbes Magazine collection.