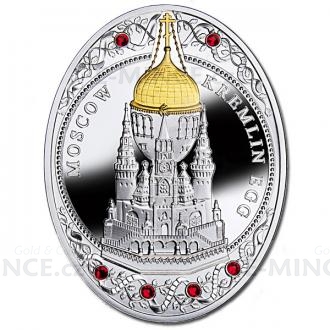 The coin is issued in the series dedicated to theexceptional Imperial Fabergé Eggs. These jewellery masterpiecessymbolize extravagance and luxury. Designed by Peter Carl Fabergé and his assistants for the Russian Tsars, Alexander II and Nicholas II, the eggs were made of gold and silver decorated with enamel and gemstones.

Until now in the series the following coins have been issued: the “Coronation Egg”, the “Lily of the Valley Egg”, the “Clover Leaf Egg”, “The Duchess of Marlborough Egg", the “Pansy Egg”, the “Bay Tree Egg” and the “100th Anniversary of Patriotic War 1812”.

• 56,56 g coin
• minted in .925 silver
• decorated with SWAROVSKI ELEMENTS
• its uniqueness is guarantedd by the low mintage – up to 7,000 pcs
• offered in an exclusive presentation case
• legal tender in New Zealand

Obverse:
At the bottom – open „Spring Flowers Egg” (1899-1903) with a miniature basket and a bouquet of anemones. Above the basket – an effigy of Her Majesty Queen Elizabeth II. Below – and inscription: ELIZABETH II and the mint mark (m/w). Around – a decorative, neorococo ornament. Along the rim – inscriptions: NIUE ISLAND (the issuer), 2 dollars (the face value), 2013 (the year of issue).

Reverse:
In the central part – a  stylized image of the Cathedral of Dormition in the Moscow Kremlin. At the top, along the rim – an inscription: Moscow Kremlin Egg (the name of the coin in English). Around – decorative, neo-rococo ornaments. In the upper and lower part of the coin – SWAROVSKI ELEMENTS.