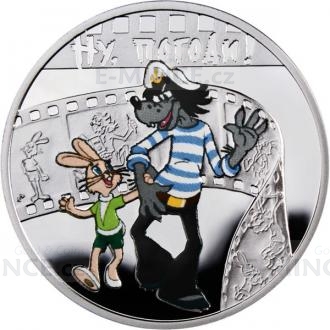 We are proud to present an unusual series of collector coins, “Cartoon Characters”, dedicated to the highly recognizable cartoon characters of the world.

The first coin in the series shows Mis Uszatek (Teddy Floppy Ear), and the latest addition to the series depicts the characters, Wolf and Hare, from the cult Russian cartoon “Nu, pogodi!” (“You just wait!”).

The coins have been struck using silver Ag 925 blanks, with a very low mintage not exceeding 8,000 pieces. The reverse features the Wolf and the Hare, depicted using the pad printing technology.
Obverse:
In the central part of the coin: a stylized image of the celluloid with selected scenes depicting interesting cartoon characters. To the left, at the top, along the edge the inscription: ELIZABETH II, to the right: 1 Dollar, the mark of the Mint: MW. At the bottom the inscription: Niue Island.

Reverse:
In the central part of the coin: the characters of the Wolf and Hare (depicted using pad printing), with the celluloid in the background and selected frames from the cartoon. At the top the inscription in Russian : НУ, ПОГОДИ! (Nu, pogodi!).