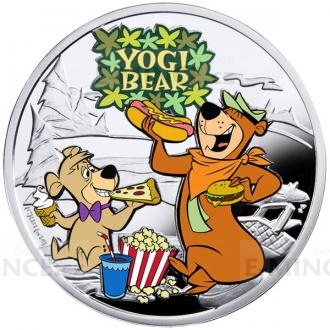 The forthcoming coin from the fabulous "Cartoon Characters" series. This collection, produced especially for the youngest collectors, depicts familiar cartoon characters adored by all children.

A great gift for all lovers of cartoons!
• Proof Quality 925 Silver
• Fairytale design
• Decorated with pad printing
• Limited mintage - up to 2,222 pcs
• Sold in an attractive blister pack
• Certificate of Authenticity guaranteed by the Mint of Poland
• Legal tender in New Zealand

Yogi Bear is a family cartoon character, created by Hanna-Barbera Productions, who has appeared in numerous comic books, animated television shows and films. He made his debut in 1958 as a supporting character in The Huckleberry Hound Show. Yogi Bear was the first breakout character created by Hanna-Barbera and was eventually more popular than Huckleberry Hound.[1] In January 1961, he was given his own show, The Yogi Bear Show, sponsored by Kellogg's, which included the segments Snagglepuss and Yakky Doodle.[2] Hokey Wolf replaced his segment on The Huckleberry Hound Show.[3] A musical animated feature film, Hey There, It's Yogi Bear!, was produced in 1964. Yogi was one of several Hanna-Barbera characters to have a collar. This allowed animators to keep his body static, redrawing only his head in each frame when he spoke. (source: http://en.wikipedia.org/wiki/Yogi_Bear)