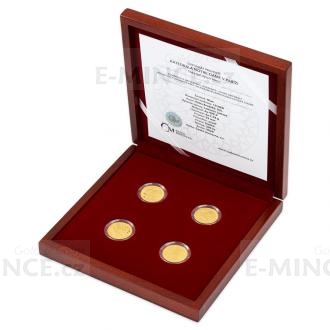 In 2020, we commemorate the first anniversary of the fire that devastated the Notre-Dame Cathedral in Paris. The fate of the tabernacle, which is the true heart of historic Paris, did not leave anyone unsettled. The Czech Mint issued a set of four gold coins as a commemoration of the rich history of the Mother of God.

There is no reason not to believe that the cathedral would not rise from the ashes. The foundation stone of the building was laid in 1163 and was completed 182 years later in 1345. French history was stormy and the fate of the cathedral was the same. It was affected by the Great French Revolution, when the entire cathedral was looted in 1793. The revolutionaries destroyed the precious statues, the organs, glazed the stained glass windows, knocked out the masonry, and melted the precious metal altars and most of the bells from which the cannons were made. The building was to be sold to private property and used for building materials ... However, Napoleon Bonaparte seized power and he averted the cathedral's destruction. His grand coronation to the Emperor took place there in 1804. The real wave of interest in the restoration of the national monument, however, rose only after 1831, when Victor Hugo published his most famous novel Temple of the Mother of God in Paris. The heartbreaking story of the Quasimodo encouraged a public collection for the reconstruction of the cathedral and helped to preserve the Parisian jewel for future generations…

The reverse sides of the gold coins were processed by the medal maker Petra Brodská, DiS. These present not only the cathedral itself, which is the most beautiful French Gothic building, but also its famous bells which announced a number of major historical events. Especially Quasimodo loved their melody. Other coins are dedicated to important personalities associated with the Parisian temple. The first is Napoleon Bonaparte, the second is Joan of Arc - Virgin of Orleans, who was rehabilitated and beatified in the cathedral. Since the coins are issued with a foreign license of the island of Niue, their common obverse side bears the necessary attributes of this foreign issuer - the emblem, the nominal value of 10 DOLLARS (NZD) and the year of the issue 2020 that are incorporated into the broken arch of the cathedral.

Set of four coins is stored in a luxurious wooden box.