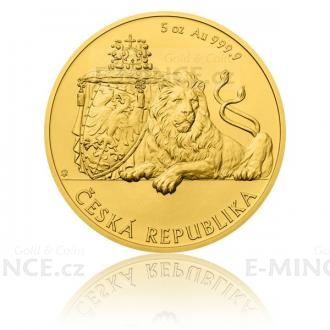 A major world banks and mints are proud of their own investment coins. As their name suggests, rather than the collectors and numismatists, these coins attract mainly the investors, who are aware, that a coherent portfolio needs pure gold. Because the Czech Republic have not yet had its pure investment coins, the Czech Mint presents its own range of investment coins called the Czech nationhood.

The world central banks and mints elect for their investment coins an easily recognizable national motives. The theme of the Austrian coin "Wiener Philharmoniker" is thus one of the most respected orchestras of classical music in the world. The Canadian "Maple Leaf" carries the official state emblem in the form of a maple leaf. The South African "Krugerrand" is dedicated not only to the historical president Paul Kruger, but also to the national symbol of a Springbok. Also a number of other countries depicts the national animals on their investment coins: The American "Eagle" belongs to the majestic eagle, the Chinese "Panda" to black and white giant bear and the Australian "Kangaroo" to the characteristic representatives of kangaroos. The Czech Mint investment coins are no exception - they belong mainly to the Czech lion and next to it also to the St. Wenceslaus female eagle.

Lying two-tailed Czech lion in unusually realistic concept dominates to the reverse side of the investment mintage, where it guards the St. Wenceslas crown, along with a fiery eagle depicted on the shield. The author of the original compositions became Jaroslav Bejvl, who died at the age of 75 years, so he did not manage to finish his masterpiece. The unfinished coin was therefore completed by the young medalist Asamat Baltaev, DiS. The obverse side then belongs to the attributes of the island of Niue, which provides a license for minting investment coins for the Czech Mint, and bears the name and portrait of Queen Elizabeth II., the year of issue of the coin 2018 and its nominal value of 250 DOLLARS (NZD).

This coin is minted from pure gold, weighing five times the troy ounce - a globally recognized measurement units - and is exempt from VAT!